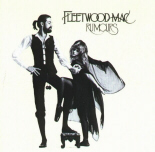 Warner Bros. Records has announced that it will make a series of vinyl albums and singles available on April 16th exclusively in honor of Record Store Day -- a celebration of the unique culture surrounding over 700 independently owned record stores in the USA, and hundreds of similar stores internationally. Warner Bros. Records is not only a partner in Record Store Day, but readies more vinyl for release than any other label. This year, we are outdoing ourselves with even more special releases to meet the demands of vinyl enthusiasts nationally and internationally as well. All items are available in very limited quantities and are sure to sell out fast, so don't delay!
[Rumours included in a long list of vinyl releases]
Fleetwood Mac: Rumours - Standard and Deluxe Editions (Bernie Grundman Mastering)
The Diamond Award Winning, Grammy "Album Of The Year" masterpiece from Fleetwood Mac is available as an Audiophile Deluxe Version pressed on 2-Disc 45 RPM, 180 gram vinyl (pressed At Pallas), as well as a standard 33 1/3 single disc.
About Record Store Day: Record Store Day is managed by the Music Monitor Network and is organized in partnership with the Alliance of Independent Media Stores (AIMS), the Coalition of Independent Music Stores (CIMS) and celebrates the culture of independent record stores by playing host to in-store events/performances, signings and special product releases on a global scale on Saturday, April 16, 2011.
For more about National Record Store Day, please visit www.recordstoreday.com.
Marketwire