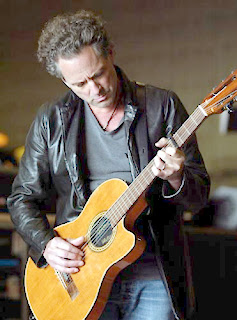 The event will be held April 28-30 in Los Angeles.


Lindsey Buckingham will receive the ASCAP Golden Note Award at the sixth annual ASCAP "I Create Music" Expo, to be held April 28-30 at the Renaissance Hollywood Hotel in Los Angeles.
Buckingham, whose seventh solo album will be released later this year, will speak about his career as a songwriter, producer, guitarist and singer as a solo artist and as a member of Fleetwood Mac. Previously, ASCAP's Golden Note Award has been presented to Tom Petty, Quincy Jones, Stevie Wonder, Garth Brooks and others.
Buckingham and Stevie Nicks joined Fleetwood Mac at the end of 1974 and appeared on the band's breakthrough album Fleetwood Mac, which featured his compositions "Monday Morning," "World Turning" and "I'm So Afraid." On 1977's Rumours, his songs included "Go Your Own Way" and "Second Hand News." He was inducted into the Rock and Roll Hall of Fame in 1998 as a member of Fleetwood Mac.
Buckingham's solo career began in the early 1980s; his most recent release was 2008's Gift of Screws.

To Register to attend


(Reuters) - Fleetwood Mac frontman Lindsey Buckingham will be one of the keynote speakers at an annual songwriter symposium in April hosted by performing rights group ASCAP, organizers said on Wednesday.
Buckingham, 61, will discuss his career during an on-stage interview on April 29, the midway point of the three-day ASCAP "I Create Music" Expo. He will also be presented with the group's Golden Note Award, a prize previously given to the likes of Tom Petty, Quincy Jones and Stevie Wonder.
The expo, now in its sixth year, attracts almost 2,000 songwriters at all career stages from around the world to Hollywood. It is open to the public and to writers affiliated with rival groups such as BMI and SESAC. The organizations collect royalties for the writers and copyright owners of songs performed in public such as television, radio and arenas.
Other big names lined up so far for various panels include singer/songwriter Rufus Wainwright, veteran composer/arranger Van Dyke Parks, Parliament-Funkadelic keyboardist Bernie Worrell, Goo Goo Dolls frontman John Rzeznik, film composer Marco Beltrami, and horror director Wes Craven.
Buckingham, along with musical collaborator and former lover Stevie Nicks, helped transform Fleetwood Mac from a venerated blues-rock band into a stadium-filling pop-rock machine after they joined in the mid-1970s. The singer/songwriter/guitarist composed such songs as "Go Your Own Way," "Tusk" and "Big Love" before quitting for a decade in 1987. He has also released five solo albums.
(Reporting by Dean Goodman)
Nickslive at Thursday, February 24, 2011
Share