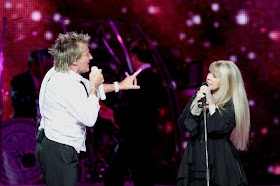 
Spare the Rod and spoil the show?
Not on a Saturday night at the first of two Rod Stewart performances, where the rock icon was generous with a greatest-hits set featuring the songs that have helped him sell out Madison Square Garden a whopping 42 times.
Add to that concert-craft tricks for show momentum like inviting opening act Stevie Nicks (who looks great and has a new record dropping May 3) to join him for a mini duet set.
Read The Full Review Here
Nickslive at Sunday, March 27, 2011
Share