Rod Stewart & Stevie Nicks: First Show Together is Sunday... May Perform Stand Back Together! 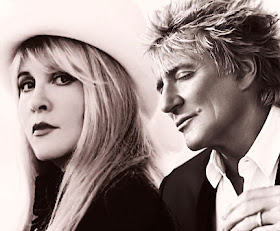 
Rod Stewart clearly has a weakness for women: The British rocker, 66, has fathered eight children with five women.
So when three of his daughters — Kimberly, 31, Ruby, 23, and Renée, 18 — suggested Stevie Nicks as a touring mate for their father’s latest tour, Stewart listened. The pair will co-headline the “Heart and Soul Tour,” which opens Sunday at BankAtlantic Center in Sunrise.
“I wanted to do a tour with someone and … they all love her, and she’s an icon, and so that’s how it happened,” Stewart said in a joint telephone conversation with Nicks.
Nicks is in Los Angeles, flush from a visit to the Glee set where the cast sang her Fleetwood Mac classic Landslide. Stewart is in England working with old partner Jeff Beck on new tunes. The two rockers burn through the phone lines like old friends, though before this tour, Nicks says she and Stewart had only met twice before, once “at a fantastic New Years’ Eve party Rod had at his beautiful house” in the 1970s and another time at a rehearsal studio.
“I can’t remember anything in the ’70s,” Stewart says, laughing.
Contrary to popular belief, rock stars don’t hang out together.
“You don’t get to meet your peers. Everyone is always working or in a separate city. We don’t live in an enclave in L.A. where rock stars live, where we hang out and barbecue,” Nicks, 62, jokes.
Full Article

So when the two hit the phone, much catching up is at hand. Not surprisingly, the baby gets top billing. In February, Stewart’s third wife, Penny Lancaster, gave birth to their son Aiden. Apparently, Stewart’s growing catalog of romantic standards albums has done the trick.
Nicks can’t wait to see the baby: “How’s the baby? Is he good?”
“He’s fabulous! An extremely handsome lad!”
Baby banter out of the way, the two talk about the tour — except there’s not too much to talk about. Rehearsals, set for a soundstage in West Palm Beach, hadn’t begun.
“Until we get to Florida to do several days of production and rehearsal, we don’t really know. We have songs we are sort of leaning toward but we’re not sure yet,” Nick says.
The process should be speedy, Stewart says. “Stevie’s a great harmony singer. I’m clueless about singing harmony. Stevie would like to do Reason to Believe, The First Cut Is the Deepest, Young Turks. Darling, you could sing anything you want. It’s your call.”
Nicks’ Leather and Lace and Stop Draggin’ My Heart Around already are in duet form so these would seem logical. Stewart covered Nicks’ 1983 hit Stand Back for an album in the early ’90s. “We may do that,” he says.
This much is for certain: “Without a doubt, I’m going to introduce Stevie at the top of the show — like a gentleman should,” quips Stewart, ever the proper English gentleman.
The troubled concert industry is eyeing this tour with much interest, especially in the wake of last year’s successful pairing of Carole King and James Taylor. The boomers’ Troubadour tour, in which the two performed together for the entire show, grossed more than $62 million in 2010 to rank No. 6 according to Billboard Boxscore.
The Nicks-Stewart two-fer is not expected to follow that format. Nicks will perform a set of solo and Fleetwood Mac hits, followed by a Stewart set in which he promises to dig into his rock catalog. At some point during the three-hour-plus show, the raspy blonds will sing together.
There will only be one new song on this tour — Nicks’ Secret Love, the first single from her coming album, In Your Dreams, her first solo disc in 10 years . Nicks wrote Secret Love in 1976, and its demo has been floating around cyberspace for decades.
“In this day of the Internet, if I did five new songs, those songs would be filmed badly and on YouTube in the morning. Until my record comes out in May nobody is hearing any of it. I want it to be a surprise,” she says.
Much like the King-Taylor teaming, audiences will tap into the stars’ mutual affection society.
“I’ve been listening to Rod’s songs for the last couple of weeks and reliving my past,” Nicks says. “This music, the same with Fleetwood Mac, is the tapestry of all of our lives. Lindsey [Buckingham] and I moved to L.A. in 1971, and Mr. Stewart was a huge rock star, and we were listening to and being totally inspired by Rod before we had any idea.”
“Isn’t that lovely?” Stewart interjects. “Lovely to know I’ve been of some use to somebody!”
Nickslive at Wednesday, March 16, 2011
Share