When you take two of rock’s most memorable vocalists and pair them together, you can expect sparks to fly.
And that’s exactly what happened Friday night at Rogers Arena, where fans were treated to lengthy sets by both Stevie Nicks and Rod Stewart performing on the same stage on what was dubbed the Heart & Soul Tour.
The pairing not only made sense stylistically — both Stewart and Nicks possess their own set of well-worn, sand-blasted pipes — but it also served to highlight two new releases: Stewart’s fifth instalment in his Great American Songbook series released late last year, and Nicks’ first studio effort in 10 years, In Your Dreams, which is set to be released on May 3.
Considering the breadth and impact of both artists’ career — with millions of records sold and armfuls of Grammy nominations and awards — new material would only play a small part in what turned out to be two fairly classics-heavy sets, which is probably what their 12,000 fans in attendance really wanted more than anything.
They certainly would not leave disappointed.
Stewart surprised just about everyone by stepping onto the stage right off the bat to introduce “one of the great voices of the 20th century” and the crowd on the floor rose to its feet as Nicks, draped in her signature black dress with sequined arms and gloved hands, made her way to the microphone to kick off her set with a rocking Stand Back.
For the Full Review visit The Vancouver Sun website
Even at 62, Nicks certainly didn’t shy away from pulling a few cool moves, spinning around and letting her silver-blond hair follow her, even finishing off the song with a nice kick.
Though her range may have narrowed through the years, her nasally voice still packs a punch. 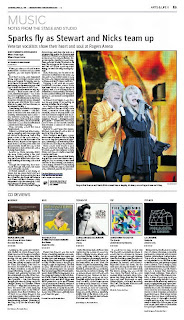 If Nicks seemed a tad shaky at times, her six-piece band and two backup singers overpowering her on a few occasions, she found her balance with Fleetwood Mac’s Dreams, which shimmered with the same glory it did on Rumours all those years ago.
Nicks followed with latest single Secret Love, and then she took on a priestess-like quality on Sorcerer and Gold Dust Woman, waving her hands in the air as if to conjure ancient, forgotten spells, dancing around longtime guitarist Waddy Wachtel as he bent the strings on his Stratocaster and fed off Nicks’ quasi-mystical energy to send the song soaring sky-high.
Sure, Nicks may not be able to hit the notes on Rhiannon the same way she used to, but it didn’t seem to sway her fans, who clapped and sang along to Fleetwood Mac’s classic radio hit.
Topping it off with an acoustic Landslide (another where Nicks has been forced to adjust her pitch slightly) and a butt-kicking Edge of Seventeen (which probably had many in the audience feeling like teenagers again), it was mission accomplished for Nicks.
For the Full Review visit The Vancouver Sun website
Nickslive at Saturday, April 23, 2011
Share