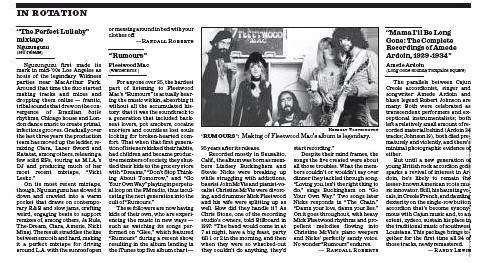 
For anyone over 35, the hardest part of listening to Fleetwood Mac’s “Rumours” is actually hearing the music within, absorbing it without all the accumulated history: that it was the soundtrack to a generation that included backseat lovers, pot smokers, cocaine snorters and countless lost souls looking for broken-hearted comfort. That when that first generation of listeners kicked their habits, had children and became productive members of society, they shuttled their kids to the grocery store with “Dreams,” “Don’t Stop Thinking About Tomorrow,” and “Go Your Own Way” playing in perpetual loop on the FM radio, thus inculcating the next generation into the cult of “Rumours.”
These followers are now having kids of their own, who are experiencing the music in new ways — such as watching its songs performed on “Glee,” which featured “Rumours” during a recent show, resulting in the album landing in the iTunes top five album chart — 35 years after its release.
Recorded mostly in Sausalito, Calif., the album was born as members Lindsey Buckingham and Stevie Nicks were breaking up while struggling with addictions, bassist John McVie and pianist-vocalist Christine McVie were divorcing, and drummer Mick Fleetwood and his wife were splitting up as well. How did they handle it? As Chris Stone, one of the recording studio’s owners, told Billboard in 1997: “The band would come in at 7 at night, have a big feast, party till 1 or 2 in the morning, and then when they were so whacked-out they couldn’t do anything, they’d start recording.”
Despite their mind frames, the songs the five created were about all those troubles. What the members couldn’t or wouldn’t say over dinner they tackled through song. “Loving you, isn’t the right thing to do,” sings Buckingham on “Go Your Own Way.” Two songs later Nicks responds in “The Chain.” “Damn your love, damn your lies.” On it goes throughout, with heavy Mick Fleetwood rhythms and propellent melodies flowing into Christine McVie’s piano weepers and Nicks’ perfectly sandy voice. No wonder “Rumours” endures.