SPOTTED: Mick Fleetwood, founder and co-namesake of the legendary rock band Fleetwood Mac, was spotted at the downtown Padre Hotel this weekend. The British-born Fleetwood was seen talking to friends and fans on the Prairie Fire lounge, but it was not immediately known why he was in town.
Bakersfield.com

MICK'S VISIT: It turns out legendary rocker Mick Fleetwood was in Bakersfield this past weekend because he's a big Formula 1 race face. Fleetwood, co-founder of Fleetwood Mac, stayed at the downtown Padre Hotel for three days to attend a Formula 1 gathering out at the Buttonwillow Raceway Park. 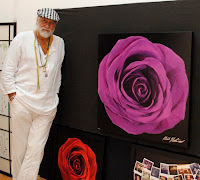 The Shops at Wailea

Célébrités Gallery of Celebrity Fine Art presents a reception for rocker/artist Mick Fleetwood on May 25 on Maui.
The gallery will unveil a selection of Fleetwood's latest photographic artwork from 6 to 9 p.m.
For more information call (808) 875-6565.

Not clear if Mick will be in attendance.  With him being in California and spotted in Bakersfield - could he be heading to The Wiltern on Thursday night for Stevie's Birthday??

Turns out the event at the Shops at Wailea didn't go ahead as planned as Mick was still in southern California... The Wiltern here you come!!
Nickslive at Tuesday, May 24, 2011
Share