Stevie Nicks gets personal on her new album 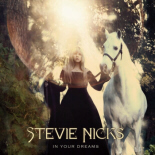 [If you buy the itunes version of Stevie's new album... All this song inspiration below is part of the cd booklet within itunes]


Stevie Nicks released her new album In Your Dreams last week and it's a hit, coming in at #6 on the charts. The veteran songstress recently sat down to open up to fans about the inspiration behind 'In Your Dreams' 13 tracks. Check out what she has to say:
SECRET LOVE - I love this song. I still do not remember exactly who it is about...I wrote it a very long time ago. Life was moving very fast in the late '70s...Love was everywhere. We were beautiful. I saw everything through a sort of stained glass window of perfection. It was a pretty spectacular time and I think the song represents many relationships, not only mine, but lots of people at that time. I was living in a pink Spanish house which belonged to silent film stars. I wrote a lot of songs there and this was one of them. I didn't completely remember the song and amazingly discovered an early version of it on YouTube.
FOR WHAT IT'S WORTH – Somewhere in the '90s – in my post Klonopin era (a drug that almost destroyed me)– I'd just come out of 47 days in rehab. I was trying to recover. I was petrified of life with no tranquilizers. I was afraid to come back into the real world. Someone appeared out of nowhere. An angel stepped in. He arrived and walked me through and he saved my spiritual life. I think it's a reminder for everyone that sometimes when you are filled with fear or pain, someone arrives and takes you by the hand and helps you on your journey.
IN YOUR DREAMS - This was another difficult time in my life and when I was on the road touring my sound engineer would hear me say, "I can't do it...I can't go up there." And he would say, "Stevie, I'm right at the other end of this cord." His words of assurance that I would sound good made me feel safe.
WILD SARGASSO SEA – This song is based on the book and movie of the same title. It is the precursor to Jane Eyre. It was about Mr. Rochester falling in love with Antoinette and how he felt the moment he met her on the island. They both went mad but Antoinette Rochester never recovered and was locked up.

NEW ORLEANS – I've always loved New Orleans. In the peak of Fleetwood Mac's success, we'd play New Orleans and we would ride around in a white carriage with white horses right down Bourbon Street. We were all dressed up and drinking champagne. My memories of that city were crushed watching the devastation of Katrina. There was a little boy on TV you might remember who said, "Someone has to help us." They showed him over and over. I was in tears after hearing him speak for all the people of New Orleans. Right after that little boy spoke for his forgotten city, I wrote the poem which became the lyrics to this song. This is for all the beautiful people of New Orleans.
MOONLIGHT (A Vampire’s Dream) - It was 2009 and I was on tour in Melbourne, Australia. I needed to stay awake to avoid jet lag. I went to see the film New Moon and then we all sat around and watched the Michael Jackson movie...By then it was midnight and I knew I had to go back and see New Moon again. Afterward I started an essay about all the "Edwards" in my life. I thought about all the tales of abandonment and the beautiful love story of Bella and Edward. He's cursed to live life as a monster but Bella sees through. Yet, he leaves her because he knows that is what he has to do. She sits in her chair for months. I so understood that feeling. We went on to Brisbane and I kept thinking, "Why can’t they be together?" And at that moment, I wrote the song. And the very next moment I said to myself, "I'm ready to make a record now." Before that I wondered if I would ever make another record but I knew it was time. This is one of my favorite songs on the record. We kept a photo of Bella and Edward on the soundboard while we recorded.
ANNABEL LEE – When I was 17, it was a very good year. I met Lindsey and I read some of the poetry of Edgar Allen Poe. Annabel Lee was my favorite. I picked up my guitar with the open book in front of me and 10 minutes later I went and played it for my mom. It was never recorded. It just lived in my heart until the mid nineties when I made a piano demo of it in Phoenix. Finally she has come to life.
SOLDIER'S ANGEL – This is a love song, too. It's my love song to all the men and women and their families that I've visited over the years at Walter Read Hospital in Washington DC and Bethesda Naval Hospital. Each and every one of them touched me in profound ways. Their bravery and courage is something that I will keep with me in my heart for as long as I live. They brought more to me than I could ever have brought to them. The song was so important that I asked Lindsay to come over and bring his musical magic to it and he did, as he always does.
EVERYBODY LOVES YOU - This is about being part of a duo – a man and a woman in a musical group. Two people who knew each other from very early on. I met Lindsey in high school. I walked right up to him and asked to sing "California Dreaming" with his band. And so I did. Then I didn't see him for two years...Well you know the rest. And Dave of course met Annie when they were both very young and unknown. We both performed with our partners long after our romantic relationships ended. Let's say, we both understood what we'd been through.
GHOSTS ARE GONE - This is about a relationship that became frozen in time and died. Around that time, I was introduced to an artist who became a record company executive named Amanda Ghost. I was fascinated with that name which inspired this song as well. And I always have to have a few big rock songs on my albums. This is one of them.
YOU MAY BE THE ONE - This started as a poem I wrote during the FM "Say You Will" Tour. It's about a relationship that could have worked but it missed by a mile...or missed by a second.
ITALIAN SUMMER – This is a very special song, one of my most romantic. Something extraordinary is going to happen with this song one day. It's a perfect example that you do not have to fall in love to write a love song. I fell in love with Italy one summer. When you listen to it, I think it sounds like you are on a magic carpet ride. I was staying in Room 102 in a villa which became a hotel in Ravello. I arrived there completely unplanned. Beauty was everywhere. One day I'll return and sing "Italian Summer" there.
CHEAPER THAN FREE – We have Reese Witherspoon to thank for this title. She was visiting a recording session one day and Dave mentioned that he had to go to Nashville for some work...Reese volunteered to have him stay at her condo there. I chimed in that it would save him a lot of money. "What's cheaper than free?" quipped Reese...Dave and I both looked at each other and knew we were going to write a song with that title which we did very quickly.