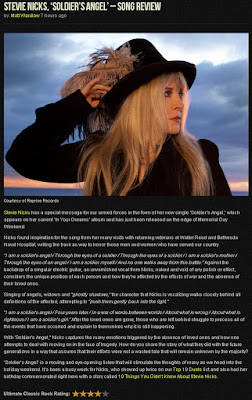 Stevie Nicks has a special message for our armed forces in the form of her new single ‘Soldier’s Angel,’ which appears on her current ‘In Your Dreams’ album and has just been released on the edge of Memorial Day Weekend.
Nicks found inspiration for the song from her many visits with returning veterans at Walter Reed and Bethesda Naval Hospital, writing the track as way to honor those men and women who have served our country.
“I am a soldier’s angel / Through the eyes of a soldier / Through the eyes of a soldier / I am a soldier’s mother / Through the eyes of an angel / I am a soldier myself / And no one walks away from this battle.” Against the backdrop of a singular electric guitar, an unvarnished vocal from Nicks, naked and void of any polish or effect, considers the unique position of each person and how they’re affected by the effects of war and the absence of their loved ones.
Read the full review at Ultimate Classic Rock