Fleetwood Mac star Stevie Nicks joins Simon in conversation. The voice behind such Fleetwood Mac classics as 'Dreams' (which she wrote), Stevie releases her latest solo album, 'In Your Dreams' this week. Produced by Glen Ballard and Eurythmics' Dave Stewart (who shares writing credits on many tracks), the album features contributions from Fleetwood Mac's Mick Fleetwood and Lindsey Buckingham.
Simon Mayo Drivetime

Prior to Simon Mayo... Coming up beginning Friday: 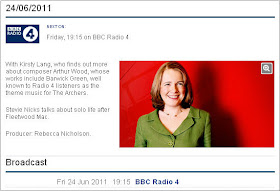 Mark Franklin Programme Director at Town & Country Broadcasting in Wales and Presenter on 106.3 Bridge FM, will be interviewing Stevie this Friday, June 24th. The interview will air likely early next week in the UK - Mark will give notice via Twitter on the date.
Mark's morning program airs from 7am to 11am Monday to Friday on 106.3 Bridge FM

Smooth Radio 102.2
A station that's really pushing "In Your Dreams".  This week the album is "Album of the Week", they have a contest running "Your Top 3 at 3 with Kid Jensen" where you can win the album.  They have a review posted on their website HERE Plus, UK Radio host Mark Goodier had the chance to interview Stevie today (June 22nd) for his program "The Mark Goodier Show". His interview with Stevie, if I'm reading his Tweets correctly, will air on release day for In Your Dreams, which is June 27th in England.

[update]
Stevie's interview with Mark Goodier will air next week on Monday, Tuesday and Wednesday 11:25am UK Time: