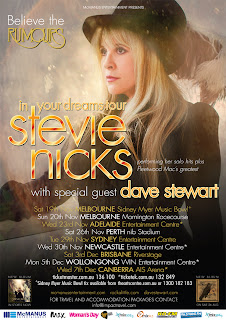 Stevie Nicks, known for both her work with legendary super group Fleetwood Mac plus her own hugely successful solo career, will be touring this November and December.
Joining Stevie for these special shows will be celebrated musician and songwriter, Dave Stewart, from Eurythmics, who co-produced Stevie's new solo album, In Your Dreams.
Stevie Nicks’ incredible solo career has given her more than forty Top 50 hits, selling more than 140 million albums worldwide. Her top hits include ‘Leather and Lace’, ‘Edge of Seventeen’, ‘Stand Back’, ‘Bella Donna’, ‘Rooms On Fire’ and ‘Stop Draggin’ My Heart Around’.
Fleetwood Mac’s 1977 Grammy Award winning Album of the Year, Rumours, stands as one of the greatest albums ever made. It has sold more than one million copies in Australia. Thanks to a recent episode of glee dedicated to this classic album, Rumours returned to the Australian charts at number two. Fleetwood Mac’s extensive back catalogue includes ‘Rhiannon’, ‘Gypsy’, ‘Tusk’, ‘ ‘Dreams’, ‘Don’t Stop’, ‘Songbird’, ‘Go Your Own Way’ and so many more.
Dave Stewart's music career spans three decades and more than 100 million album sales. His biggest hits include ‘I Only Want To Be With You (The Tourists)’ to Eurythmics hits ‘Sweet Dreams (Are Made Of This)’, ‘Missionary Man’, ‘Sisters Are Doin’ It For Themselves’, ‘Would I Lie To You?’ and ‘Angel’.
Stevie Nicks and Dave Stewart will be performing their greatest hits from their respective bands and also highlights from their solo careers.
Don’t miss your chance to see two extraordinary performers in what promises to be the musical highlight of the year!
McMANUS ENTERTAINMENT PRESALE - Gain access to tickets before the general public! Simply click on the relevant link below during the presale period and enter the password GYPSY.