American Thunder Music Festival (with Stevie Nicks) Will be broadcast... 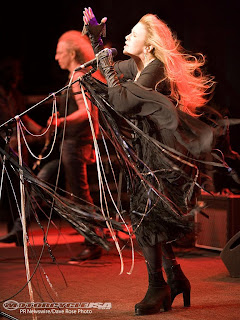 The inaugural American Thunder Music Festival, a benefit concert for the Bob Woodruff Foundation, made history in front of fans this past weekend when Jeff Bridges hosted and performed along with Stevie Nicks and John Fogerty. Nicks performed in the midst of a howling thundering windstorm and tornado warnings... The show was the first major benefit concert in the 71-year history of the Sturgis Motorcycle Rally.

American Thunder will be broadcast internationally to over one million active duty men and women of the U.S. Armed Forces in more than 175 countries and U.S. territories, and on U.S. Navy ships around the world.