"This devoted audience of some 5,900 admirers genuinely loved Stevie Nicks because her music truly had been the soundtrack to their own lives. When the lights went down, and the opening chords to "Stand Back" wafted through the sound system, the crowd just couldn't wait to show their appreciation." 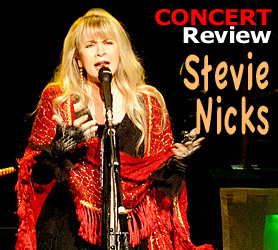 
For some reason, over the last 30 days, it seems like every time I catch a live performance of an iconic female artist, I do the time warp back to 1986. That's the year, my memory bank tells me, I last gazed upon Sade, Ann Wilson of Heart and the enigmatic Stevie Nicks. Though each of these female superstars has carved out their own unique Hall of Fame career, without a doubt, it's Nicks who really stirs up the emotions in an audience. With nearly 40 years of whirling dervish behavior behind her shawls, to this very day there's just something about this vocalist that is both captivating and passionate. And it's those very two qualities that lie at the core of who and what this artist truly is.

Personally, I've always had mixed feelings when it comes to Stephanie Lynn Nicks. I witnessed firsthand her spiral downward into booze and drugs at a Dallas concert a quarter of a century ago during her Rock a Little tour. I dutifully reported her destructive behavior in the pages of Jam. In fact, the promoter of the concert even went so far as to ban me from any backstage access for the next year because of the scathing report I did from my behind-the-scenes perch. Yeah, Stevie was one hell of a mess back then. Unfortunately, it was that image I had not been able to shake, all these years later, as I sat quietly through this evening's opening act, Michael Grimm.