"She is forever the cool rock and roll aunt who, as long as you don't spill your apple juice on her shawl, will tell you tales of woodland nymphs, players who only love you when they're playing, and vampires in the moonlight until well after the witching hour." 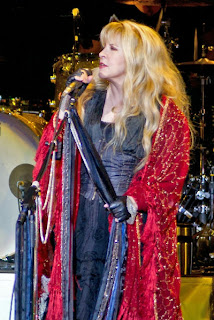 
Aftermath can't help but wonder if the people who think Stevie Nicks is some kind of wand-waving white-witch faerie queen have paid much attention to anything she's done besides "Rihannon." Not that Nicks didn't give those Woodlands creatures what they wanted Saturday; we were just a wee bit surprised at what else she gave them.

To bend the title of one of her albums, Nicks didn't rock a little Saturday; she rocked a lot.

Nicks is not going to make Lita Ford or Joan Jett (and probably not even Pat Benatar) cast any defensive spells around their amplifiers. Probably. But "Stand Back," a wicked wind-machine workout of an opener, and the new "Ghosts are Gone" had a much sharper hard-rock edge to them than we expected, like Nicks was hiding razor-blade fingernails in her fingerless gloves.