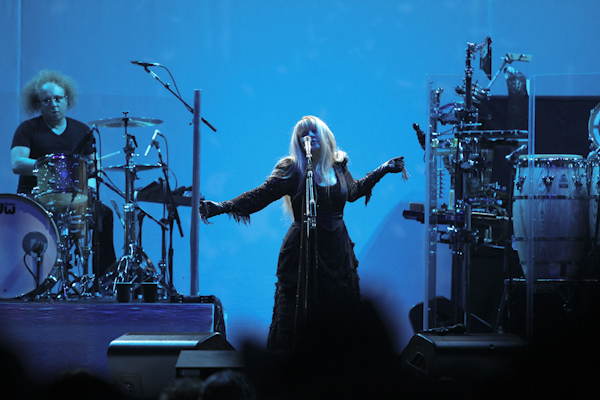 Stevie Nicks had vowed to never again play outdoor venues like PNC Pavilion in the summer humidity. But then Nicks, famous for her onstage 360-degree twirls, pulled a 180.

"I called my manager two months ago and said, 'I've changed my mind.' I believe in this record so much," says Nicks, calling from tour rehearsals in Denver. "If it means I have to go stand out there in 95-degree weather, I'm going to do it, because this record means so much to me."

The Fleetwood Mac vocalist and solo star released the CD "In Your Dreams" in May. Produced by Dave Stewart, the album has received positive reviews. Nicks became determined to play more cities. And her fondness for a certain unnamed local hotel convinced her to come to Cincinnati in particular.

"First of all, I like the hotel. You know what? I'm on a mission to bring this record to the people," she says.

That mission included placing six songs from the new CD into the nearly two-hour performance. Nicks is aware of the danger of a classic-rock performer trying to force feed new material to a live audience.

"When we did 'Rumours,' which was the second Fleetwood Mac record (from the time Nicks joined the band), we thought, 'Well, great, we won't even play anything from the first Fleetwood Mac record or any of the other Fleetwood Mac records. We'll just do the 'Rumours' record.' And we just about nearly got booed off the stage. So we went straight into rehearsal the next day and revamped the set. And that was a lesson that I, all of us, have always remembered," she says.


In May, Nicks showcased several "In Your Dreams" songs for the first time during a performance at the Wiltern Theatre in Los Angeles. The concert went well enough to convince Nicks to take it on the road, and she believes the quality of the new material matches that of the old hits.

"Even I am going, 'What is the old and what is the new?' It flows beautifully and is so much fun for me," she says. 'Basically when you're an artist that's been around for 30 years, you have to kind of keep doing those greatest hits. You get kind of sick of it, but you have to, because people want to hear those songs. With this set, I think people are gonna be knocked out."

Nicks gives a lot of credit to Stewart for the new record. She's known the former Eurythmics guitarist since 1983 and says she's always kept his name in mind as a potential producer for Fleetwood Mac or a solo record.

"He's so the equal peer of Lindsey (Buckingham) or Eric Clapton or Pete Townshend or any of those amazing guitarists. And he gets me. He gets what I do," she says.

Stewart and Nicks began writing songs together early last year, after Nicks got off the road with Fleetwood Mac. "I said to myself, 'First of all, this is definitely the guy to produce the record, and second of all, 'I just wrote a song with somebody, and I've never done that in my whole life before.' I've never done that with Lindsey, I've never (written) with anybody. I always thought it was a very selfish experience," she says.

Nicks compares the process of writing songs for the new record to the manner in which she wrote one of the most ubiquitous songs of the rock era.

"I sat down and I wrote 'Dreams' in about five minutes at the Record Plant in Sausalito in the early '70s. The songs on this record, they were written very fast. We didn't labor over anything. The good songs come off the top of your head. You just know," she says.

As for the Mac getting back together, Nicks says it's a question of when, not if.

"Fleetwood Mac never goes away," she says. "Right now Lindsey's getting ready to release a record, which by the way I think is the best record he has ever made, and I'm sorry he didn't save the songs on this record for Fleetwood Mac. It's a beautiful record. And he's going on the road. For the first time I'm not necessarily going to be the one keeping everyone waiting. Lindsey will follow his path until he's done. I will follow my path until I'm done. And when that's done, Fleetwood Mac will go back together and decide what to do."
Nickslive at Friday, August 19, 2011
Share