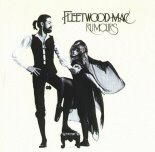 The big news this week isn't the fact that both Lindsey and Stevie drop off the Top 200 Albums Chart this week with Seeds We Sow and In Your Dreams, but that Fleetwood Mac's 1977 Rumours album continues to sell so well 34 years after it's initial release.  Again this week the album re-enters multiple Billboard charts, most notibly the Billboard Top 200 Albums Chart where it re-enters at # 74 on a 328% sales increase or 6,293 total units sold vs 1,470 units sold the week prior.  The massive increase is likely due to Amazon's deeply discounted mp3 album download that saw the title being sold for as little as $3.99 last week.  Even today the album can be bought for $5.99 as an mp3 download on Amazon.  To date Rumours has sold 2,891,943 albums in the US since November, 1991 when Soundscan began tracking over the counter sales. 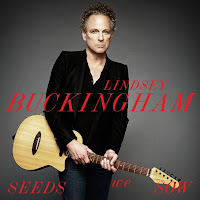 Back to Rumours:  On the Top Digital Albums Chart, Rumours re-enters at # 24 this week while on the Top Catalogue Albums Chart the album re-enters at the # 4 place right behind The Beatles at # 1, Adele and Amy Winehouse.

Stevie's In Your Dreams drops out of the Top 200 Albums chart this week along with the Top 200 Current Albums Chart and the Top 50 Rock Albums Chart.  Her new single "For What It's Worth" remains on the Top 30 AC Charts holding steady at # 26 for a second week.


On the tour front, Seeds We Sow Tour attendance to the first 3 shows reported by promoters to Boxscore have been published.  Attendance average based on these first 3 is at 73% which is higher so far then his last two tours ended up after a majority of the dates had been published... It's early yet so provided more stats are published on more dates, this will change. 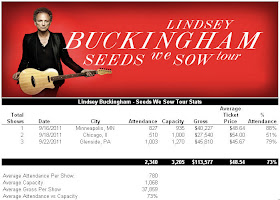