Lindsey Buckingham: Life Outside The Mac 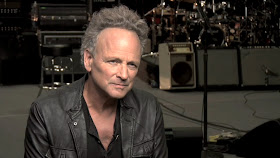 The Fleetwood Mac singer-songwriter-guitarist is back with a splendid new solo album, “Seeds We Sow,’’ that finds him stretching in several different directions. We recently chatted with Buckingham about “Seeds,’’ his recent work with Stevie Nicks, covering the Rolling Stones, and his good-natured appearance alongside “himself’’ in a “Saturday Night Live’’ sketch.

Q. On “Seeds We Sow,’’ you cover a lot of ground, from poppy stuff like “End of Time’’ to the acoustic and ethereal title track to something like “One Take,’’ which has some nutty electric guitar on it. . .

A. Yes, it’s a little tasteless flurry of lead guitar, isn’t it? [Laughs.] I like that, too. It’s technically proficient and nicely constructed as far as those things go. Lead guitar is not particularly in fashion, although in sparing amounts I think it’s still OK. Especially if it’s something you do. Imagine how Eddie Van Halen must feel right now.

Q. Why did you decide to cover “She Smiled Sweetly’’ by the Rolling Stones?

A. That’s a period of Stones that I relate to a lot for whatever reason. I guess it was right at the peak of Brian Jones’s influence before he went downhill and he was bringing a lot of European colors into the mix and influencing the way they were writing. That song was something I had done a few years earlier. Everything else from the new album was pretty much written [for it]. There was nothing sitting waiting to find a home except that Rolling Stones song. It seemed like a nice ender for the album.

Q. Lots of people do covers, but since you’re Lindsey Buckingham from Fleetwood Mac, do you hear from the Rolling Stones on something like this?

Q. You recently appeared on the song “Soldier’s Angel’’ on Stevie’s new album, and she credits you with making that song work. Do you imagine you will always have that musical language between you?

A. I think there is a musical and a nonmusical language that’s there. It’s been subverted for a long, long time. Whatever she and I had going, not necessarily as a couple, just as a musical entity sort of got splintered into little factions when we joined the band, and that was part of what we gave up. Certainly it was something of what I gave up as a musician in order to be, quote, more of a team player. But what’s interesting about Stevie and me is that there’s still a lot of love and mutual regard that [it] has been difficult to find the ground in which to have it play out. It was interesting going and working with her and spending a lot of time at her house where she was recording because it was as significant for just the hang time and the sense of reinforcement we got for those feelings that don’t get reinforced often enough. Because, you know, Fleetwood Mac survives as a band by going apart for long periods of time and then coming together in some kind of formalized way. And I don’t hang out with Stevie as a rule. But there was the sense that this was still a work in progress for the two of us. I don’t know if she would say that as well, but we even talked about maybe down the line doing something again, the two of us, and I just think that would be the sweetest thing ever.

Q. You were a good sport to go on “SNL’’ to appear in the recurring “What Up With That?’’ sketch.

A. That was pretty fun. When I heard about that, I was going, “Really? Geez, that’s obscure.’’ And then when I finally saw it, I was cracking up and I took it as a compliment. The part of me that is more lacking in self-esteem, shall we say, was thinking, “Are a lot of people even going to get that?’’ [laughs]. And Bill Hader seemed to have me down pretty well and I am a fan of his. I even took the whole theme of never getting to talk - you know, it’s not like it didn’t resonate with me [laughs].