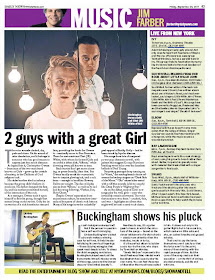 
Not if the person in question has a self worth indulging.

Lindsey Buckingham's latest solo work makes a winning case for self-love. It finds the star fetishizing his own fast fingerings - those dizzying arpeggios that speak most deeply to him. To stress the disk's engaging narcissism, Buckingham played nearly all the instruments himself. He also wrote all the songs save one (the Stones' obscure "She Smiles Sweetly").

Needless to say, it's a guitar geek's dream, in which the structure of the songs - based on the dense latticework of broken chords - steals more attention than the melodies, vocals or lyrics.

It's the perfect album to bolster a solo tour by the star, who stops by Town Hall Monday.

"Seeds We Sow" represents the least Fleetwood Mac-minded work Buckingham has issued under his own name. You can feel the sense of liberation that must have excited in him. It shows not only in his guitar flights but in his vocal tics, which center on little oohs and ahs - on sucked breaths and gasped exhales.

That's not to say the tunes themselves aren't catchy or that the lyrics aren't to the point - many of them dealing with the rapid passage of time. But the core of the songs rests on their execution - on the thrill of strings plucked precisely, quickly and with love.