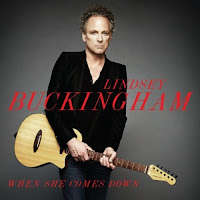 
Seeds We Sow really could be an analogy for the life of Lindsey Buckingham. He is seen as successful, supremely talented, driven but with that little edge that has been the subject of many a Rock documentary.

Seeds We Sow is the sixth solo album by the man more known as the creative force behind some of Fleetwood Mac’s finest moments including the fantastic Go Your Own Way, Second Hand News, the brutal sounding Tusk and Caroline. Some of the most personal moments of his life have been recorded for posterity and listened to millions of times over world-wide and in Seeds We Sow, it seems as though that incredible trend continues.

The gentle sounding opening of the title track hides the vision of the macabre, don’t let the refinement of Lindsey’s finger skills on the guitar fool you, to understand the man, sometimes you have to go beyond the aural and pour over his carefully placed words, there can’t be too many musicians who will invoke the name of Edgar Allen Poe alongside the ghoulish Medicine Man in any of their songs.

That’s the point of Lindsey’s music though; it demands that you take in every aspect, not just the playing of one of the top rated musicians of his and other generations but the feeling, the depth that pours out of his sole and into people’s rooms throughout the world. At this, he is one of the finest exponents of his craft.

From the downbeat  title track ofSeeds We Sow, the album has its buoyant moments that just sing and even venture in the realms of whimsy, especially on the childlike bedtime song That’s the Way That Loves Goes. The beautiful mental picture that Lindsey perfects with his guitar is raised as he goes out of the subtle whimsy into full blown rock, the song is a modern masterpiece in the vein of Steve Hackett.

For those that hanker for the type of recording that he produced on the Gift of Screws which had the bonus of having fellow Fleetwood Mac cohorts John Mcvie and Mick Fleetwood appear on the album are missing the point, sometimes you have to make a personal statement away from those you grew up with, it may be the hardest thing you do but in the end the results speak for themselves.

Seeds We Sow is a genuine modern masterpiece, outstanding in every department and the best thing Lindsey has done since the classic line up of Fleetwood Mac.