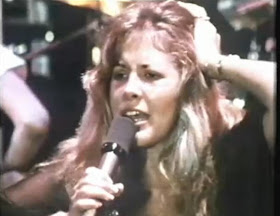 Mick Fleetwood & Lindsey Buckingham appear in this weeks episode via old 1976 interview footage that was recorded about a year and a half after Lindsey and Stevie joined the band & during rehearsals in 1976 prior to an upcoming tour. With Rhiannon on the charts at the time, Mick and Lindsey talk about finishing up the recording of Rumours, how the album compares to the white Fleetwood Mac album that was released the year before and how Lindsey and Stevie joined the band.

Stevie Nicks is then interviewed, which was recorded when she was in the UK in June.  She comments on the video footage of Mick and Lindsey being interviewed in 1976 and on the Rhiannon video that was filmed during the rehearsals that day...  Stevie describes how innocent the guys look and that those were the men she fell in love with, that innocence... Then she proceeds to annalyse the 1976 Rhiannon video footage and it's lasting legacy.

Overall this section of the show is about 8 minutes long.  Listen again on the BBC Radio 2 website.  If you don't want to listen to the full hour long show, the Fleetwood Mac section starts at about the 51:30 mark.