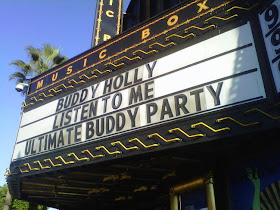 HOLLYWOOD, CALIF. — For a 75th birthday bash, it was a pretty loud affair.


More than a dozen singers and musicians — from icons like Stevie Nicks and Graham Nash to upstarts like Patrick Stump and members of Cobra Starship — gathered at Hollywood Boulevard's Music Box Theater on Wednesday to pay tribute to the music of Buddy Holly on what would have been the late rock great's birthday (which was officially proclaimed Buddy Holly day in L.A.).

"We'd like to make tonight's concert a serious rock ’n’ roll party," explained co-host and musical director Peter Asher by way of introduction. The former member of Peter and Gordon — who had a hit with Holly's True Love Ways back in the ’60s — is the man behind the related new tribute CD Listen to Me, whose set list and performers formed the backbone of the three-hour event.

That's right, it lasted three hours. More precisely, it took three hours. The event was also being filmed for an upcoming PBS special, and as anyone who's watched TV production can attest, it can be a fairly tedious and repetitive endeavor replete with glitches, retakes, delays and general silliness (including, on this occasion, a bizarre debate over whether attendees would be allowed to eat cupcakes at their tables — don't ask).

Between all the hurry-up-and-wait, though, several hundred invited guests — including Holly's widow Maria Elena, old pal Phil Everly, a handful of celebrites like Priscilla Presley and Nigel Lythgoe, plenty of musicians and industry types, and a few reporters like yours truly — were slowly but surely treated to a 20-song set of Holly classics. Here's a quick (and hopefully technical difficulty-free) rundown:

Stevie Nicks | Not Fade Away

It's the first song on the Listen to Me CD. It's a bona fide Buddy gem. And Nicks is arguably the biggest star on the roster. So opening with it is a no-brainer. Fleetwood's Mac's gypsy queen is her usual witchy self, clad head to toe in black and sporting aviator shades. The song itself isn't messed with too much — it still bops to the trademark Bo Diddley beat, pounded out by an all-star house band fronted by corkscrew-haired guitar slinger Waddy Wachtel and anchored by the veteran rhythm section of drummer Russ Kunkel and bassist Leland Sklar. No complaints there.

Stevie Nicks | It's So Easy

Nicks returns for a second go-round — and makes it look easy with this cowbell-rocking version of It's So Easy. "I totally miss him," she says of Holly. Awww. After her tune, Isaak cracks: "Stevie Nicks — remember that name. You're going to be hearing a lot from that girl."

Full Review at The Toronto Star