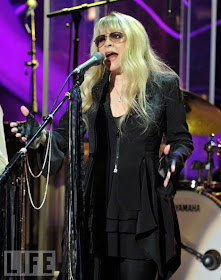 HOLLYWOOD, CA - SEPTEMBER 07: Musician Stevie Nicks performs onstage during a concert in celebration of Buddy Holly's music and legacy held at The Music Box Theatre on September 7, 2011 in Hollywood, California. 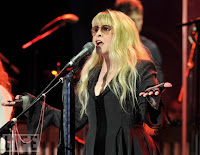 An eclectic collection of artists that included Stevie Nicks, members of Cobra Starship, Fall Out Boy's Patrick Stump Chris Isaak and Paul Anka saluted Buddy Holly Wednesday on what would have been his 75th birthday in, appropriately enough, Hollywood.

Guitarist Waddy Wachtel led a seven piece band -- with an occasional string trio --that featured bassist Leland Sklar and drummer Russ Kunkel, musicians featured on countless Asher-produced albums in the '70s. Artists spoke often about the eloquence of Holly's lyrics and the fact that his ordinary appearance and demeanor was an inspiration to so many; "we felt like we lost a friend when he passed," Graham Nash offered. ""In two, two and a half minutes, he taught you everything you need to know about life and love," was Lyle Lovett's comment.