Video: A little bit of Stevie Nicks from today`s The Talk on CBS 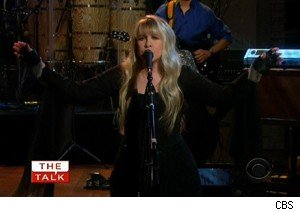 When Stevie Nicks was ready to start making her first album of new material in a decade, 'In Your Dreams,' she called former Eurythmic Dave Stewart to help with the writing and producing. Nicks said Tuesday on 'The Talk' (weekdays, syndicated on CBS) that it was a fruitful relationship, and that they wrote a song together the first day Stewart visited Nicks' house. Nicks also put on a live performance of 'For What It's Worth.'
During the songwriting process, Stewart made it clear to Nicks that if she didn't like a song they wrote, they didn't have to use it, and that his feelings wouldn't be hurt. "He could read my face, and he could see if it was going a little the other way," said Nicks. "He would just go, 'Uh...' and he would just start playing another chord. So off we'd go another way. So I never had a chance to start having that bad experience."
She then took to the stage with her band to perform 'For What It's Worth,' a song from her new album not to be confused with the Buffalo Springfield classic of the same name. Nicks' 'For What It's Worth' is a look back at her life, which seems to reference her time in Fleetwood Mac and her relationship with Lindsey Buckingham. It's an arpeggiating acoustic tune not too far in sound from 'Landslide.'
AOL TV
Nickslive at Tuesday, September 13, 2011
Share