For fans of soaring guitar work as well as personal songs, the show at Town Hall didn’t disappoint. 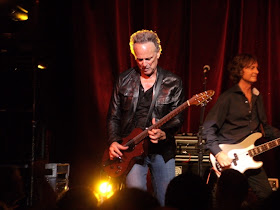 When Lindsey Buckingham performed two songs from his brilliant 1992 album Out of the Cradle — “All My Sorrows” and “Turn It On”–it was a most welcomed aspect of his show at Town Hall Tuesday night. That is because five years ago during the Under the Skin tour, he performed a terrific set at the same venue-—but no songs from Out of the Cradle (not that I recalled). So it was really refreshing that a few songs from that excellent record became part of this current tour in support of his finest album yet, Seeds We Sow.

Buckingham’s performance at Town Hall of consisted of solo stuff and Fleetwood Mac The first part of the set was just him and his acoustic guitar as showcased his amazing fingerpicking technique on mainly reflective songs such as “Shut Us Down,” reworked versions of early solo hits “Trouble” and “Go Insane,” and the always-dazzling “Big Love.” For this mainly acoustic portion of the show, Buckingham sang with tremendous emotion and passion, especially on “Big Love.”

Continue to the full review at Newsbeats
Nickslive at Wednesday, October 05, 2011
Share