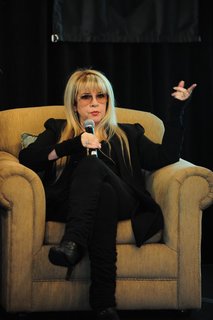 STEVIE NICKS INTERVIEW - 702 ABC SYDNEY NOV 14TH
What a fun interview!... Stevie Nicks on "Breakfast with Adam Spencer" on ABC Sydney Monday November 14, 2011 (Australia).  The interview starts off with Adam asking Stevie about her performing in 1986 in Sydney Australia back when she tagged along on the Bob Dylan/Tom Petty tour and was ordered to stop performing because she had no work visa... Plus she talks about the David Letterman incident where he kept on trying to get her on his show... Plus they talk about drugs, Michael Jackson, Rumours...writing Silver Springs, her recent appearance at the Bill Clinton event in Los Angeles...