Published by: @Nickslive of Fleetwood Mac News and Reviews

"Buddy Holly The Ultimate Buddy Party" Premieres Tonight on PBS in both the US and Canada. 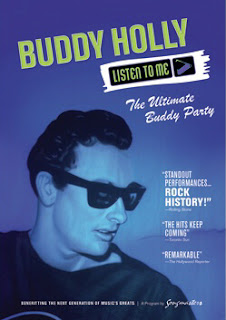 Stevie Nicks and some of her band members, Waddy Wachtel, Sharon Celani and Lori Nicks perform "Not Fade Away" plus she also performed "It's So Easy" this night although I'm not sure if "It's So Easy" is included on the show.. I hope it is.

THE DVD:
The DVD of this program should also be made available during the broadcast.  It looks like it's an exclusive with PBS and not sold in stores yet.

Okay... Saw this last night (Dec 3rd) What a great show and Stevie was really great!!  She sang both "Not Fade Away" plus the Linda Ronstadt tune "It's So Easy". She sounded so good on both! She should do "Not Fade Away" in concert, it's a fun song!

If you are planning on catching this on PBS be warned that Stevie sings "Not Fade Away" right at the beginning of the program, so you won't want to miss the beginning.  It's pledge drive month at PBS so the show was interrupted by PBS announcers asking for contributions.  Part of the deal is with a large enough contribution, the DVD can be yours. Stevie's "It's So Easy" came on about 35 minutes into the program that I saw - but this may vary depending on the market.  In any case.. both songs were great, Stevie looked great, Waddy, Sharon and Lori were with her on Stage... Lori, Sharon and Waddy were on stage practically all night playing.  And I saw her Neice Jessica in the audience when the camera was panning around.
Nickslive at Saturday, December 03, 2011
Share