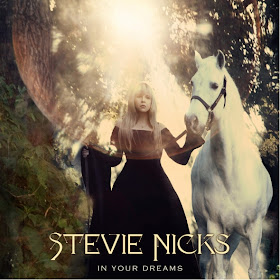 9: Stevie Nicks / In Your Dreams

In Your Dreams, Stevie Nicks‘ first truly great solo album since 1981’s Bella Donna, boasts one of the most ridiculous and simultaneously beautiful songs she’s ever sang. If you know the record already, I’m sure you can guess which track I’m talking about. It’s “Moonlight (A Vampire’s Dream)” and if you’re unfamiliar, well then I’ll just say it, it’s a love song about two star crossed vampires. It is wildly absurd and yet Nicks pulls it off and it becomes the record’s most memorable moment not because of its subject matter, but because of its gorgeous chorus. The rest of the record more than lives up to the high of “Moonlight”, becoming one of the most surprisingly cool records released this year. If you bypassed In Your Dreams because you thought it was a disposable late period record from a 70’s relic, rethink your position and get lost in it’s dreamy sweep.