Published by @Nickslive nicklive.blogspot.com for Fleetwood Mac News and Reviews

A couple of really great video captures of Stevie live in Sydney, Australia November 29, 2011. Stevie and the band sound and look awesome as usual!  Stevie looks like she's sporting either a new Rock N Roll Top Hat or its a new feather attachment thing...Either way, looks great... The hat seems a little more stable on her head then the hats from previous tours with the long white feather.  She dedicates this song to XFactor Australia's Reese Mastin.  This was the only performance of the song on the Australian tour... So Sydney, you got a bonus! 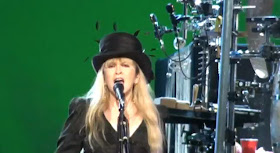