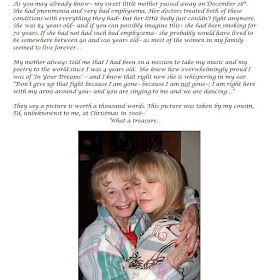 Stevie took to her official website today posting a letter explaining in a little more detail the circumstances surrounding her mothers passing.  She goes on to thank everyone for caring and reaching out to her saying "It means the world..."

Her mother Barbara was such a presents in her life right from the beginning when Stevie first burst onto the music scene back in the 70's - and even though we as fans never saw her that much, we felt we knew her just a little bit through stories Stevie would tell, and her music.  Her Mother (and Father) meant alot to her.

Thank you Stevie for sharing your mother with the world and also for keeping your fans included, we appreciate it and wish you and your family all the best. 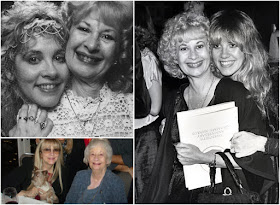 On Dec 29th news began to ripple through the Fleetwood Mac and Stevie Nicks fan community on the passing of Stevie's mother Barbara Nicks.

Our condolences to Stevie and the entire Nicks family.

Please keep Stevie and her family in your thoughts, I'm sure they'd appreciate it..
Obituary courtesy of The Nicks Fix
Online Condolences can be submitted via
Dignity Memorial

"My choice for best pop song of last year, Stevie Nicks’ “Soldier’s Angel,” points the way out of hype. As if responding to Bridesmaids and New Girl, Nicks shows us how 21st-century pop artists can speak truth and navigate politics.

In “Soldier’s Angel,” Nicks tells how her visits with wounded veterans at Walter Reed and Bethesda Naval Hospital unsettled her as a woman, citizen and icon. Lindsey Buckingham’s resonant guitar notes ensure that the song is threaded through with dread in the face of mortality. Against this stirring backdrop, Nicks’ voice—scarred and pitted by time and trouble—expresses a veteran artist’s perseverance for inspiration."

Check out the full article here