Person to Person: Check out George Clooney's home once owned by Stevie Nicks 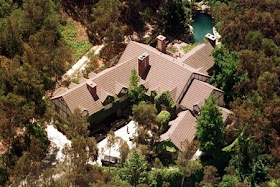 George Clooney has opened up his Los Angeles home to CBS News, showing off his kitchen (where he orders dinner), his screening room and bar, for a revival of the classic celebrities-at-home program Person to Person.

The Descendants star has lived in the 7,354 square foot mansion since 1995 which he bought for $2.2 million from singer Stevie Nicks.