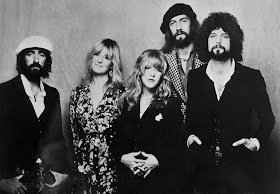 "Records like Rumours don't happen anymore," says Ken Caillat, who along with Richard Dashut and Fleetwood Mac produced the 1977 mega album that has sold a mind-boggling 44 million copies. "We spent a year and a lot of hell working on it. Lives were changed, people changed, everything became different. Something like Rumours could never happen these days. A record label would have shut us down after two weeks."

The soap opera that attended the making of Rumours has been extensively documented - married band members John and Christine McVie broke up, as did lovers Lindsey Buckingham and Stevie Nicks; even Mick Fleetwood's marriage dissolved, as well - and Caillat confirms that 1976 was a wild ride. "There were fights, breakups, drinking, drugs... We all indulged in substances. But I had to be a therapist and record producer. When everything was insane, I had to be sane. If there was a rule book, nobody game me one."

Although 1975's self-titled release was rising up the charts during the making of Rumours, Caillat says that the band was still learning how to play together. "Basically, you had two teams: Christine, John and Mick, the three Brits, were pros, and the two Americans, Lindsey and Stevie, had their shorthand, but they were still new to the group. During the making of Rumours, they became a real band, one that was very intuitive, musically and otherwise.”

This intuition lent itself to songwriting. Rather than work with demos, the group's principle writers - Buckingham, Nicks and Christine McVie - would present live fragments of ideas for the group to build work on. "Richard and I had to capture light in a bottle," says Caillat. "The band would be tuning up, and before you knew it, a song was going down. John and Mick would hear something, they'd start playing, and we had to react fast. That kind of creativity doesn't happen these days - it's frowned upon. In 2012, a band has to have a committee approve their songs. Can you imagine Fleetwood Mac making Rumours under such conditions?"

Released on 4 February 1977, Rumours hit like a meteor, permanently altering the landscape of all involved. "Like Richard Dashut, I went from being a mid-level engineer to a Grammy-winning producer in one year," says Caillat. "The record was like Jaws and Star Wars combined. Everybody saw those movies, and everybody during that time bought a copy of Rumours."

In his forthcoming book, Making Rumours: The Inside Story Of The Classic Fleetwood Mac Album, Ken Caillat and Steve Stiefel recount the producer's year behind the glass in brilliant, page-turning detail. "It's amazing how everything came flooding back to me once I started the book," says Caillat. "It's one thing to remember cutting a number one song, but to think about what I was wearing that same day, that's incredible.

"But that's the kind of record Rumours is: You remember your first time hearing it. You even remember where you were when when you heard it. Not every album has that power. This one does. I was just lucky to be a part of it."

On the following pages, Ken Caillat takes a track-by-track look back at Rumours. To order his book, Making Rumours: The Inside Story Of The Classic Fleetwood Mac Album, click here.