Happy One Year Anniversary Stevie Nicks "In Your Dreams" 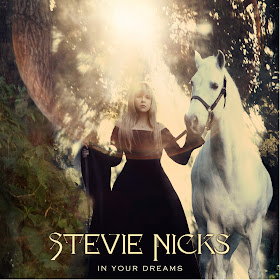 On this day one year ago, May 3rd, Stevie Nicks released her critically acclaimed 7th solo album "In Your Dreams" her first album of new material in 10 years!.  A monumental occasion!

A huge thank you to Stevie for a truly awesome album...and also a huge thanks to Dave Stewart for helping Stevie write and record in a new way... The results couldn't be better! It was well worth the 10 year wait!  One year out and I still think it's probably one of the best, if not the best things she's ever done!

The one thing left to complete this evolution will be the release of the In Your Dreams Documentary on the making of the album... When that will be nobody seems to know yet... Last I heard they were searching for a distributor... Hopefully it won't be another 10 year wait. 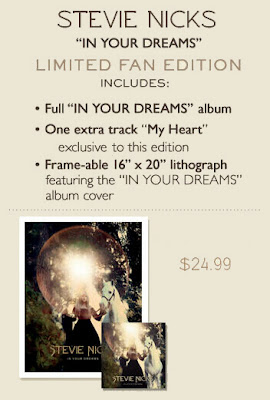 If you missed your chance when the album was first released to pick up a version of the album with the added bonus track "My Heart".  You're in luck! The Warner Bros. store still has copies of the Limited Fan Edition that includes the extra track, PLUS the 16 x 20 Lithograph of the album cover (Photo by Kristin Burns) that comes with the package deal.  Price is $24.99 plus shipping.  All credit cards + Paypal welcome.