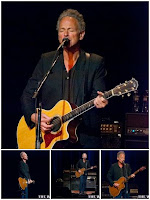 Lindsey broke out the suite jacket for his first east coast date!  No word on the setlist but there were likely no changes from the west.

Lindsey Buckingham goes his own way
By George Lenker
Masslive.com


Although he is neither a Fleetwood nor a Mac, Lindsey Buckingham is as responsible as anyone for the massive success of the band that combined those two names.

Buckingham and his then-romantic partner Stevie Nicks transformed a solid but little-known British blues band into a monster hit-making machine in the 1970s. Penning such hits as "Go Your Own Way," "The Chain," and "Second Hand News," Buckingham showed both great pop sensibilities and the ability to push the band in new directions. While 1975's "Fleetwood Mac" and 1977's "Rumours" showcased mostly catchy pop fare, 1979's "Tusk" found Buckingham pushing Fleetwood Mac in more adventurous directions.

Since his Fleetwood Mac days, however, the singer-songwriter-guitarist has not exactly rested on his laurels.


Lindsey Buckingham is a rare mega rock star who sounds as easy with a scream as he does with a whisper. He's tended more toward the latter in his solo work the past few years, with a lightly brushed folk sound that takes up lyrical subjects such as aging and introspection. But he has a vast and significant songbook, of course, to mine from all of his fateful, fitful years in Fleetwood Mac. In a show here tagged as "An Intimate Evening with…," Mr. Buckingham will perform by himself in a considerably smaller venue than usual, with a set dedicated to his 2011 album "Seeds We Sow," as well as classics from his storied past. He has not been one to shy away from vintage material in general, so expect more than a few hits—all delivered in a solo guitar style that can siphon out the essence of songs that are pure to their core.