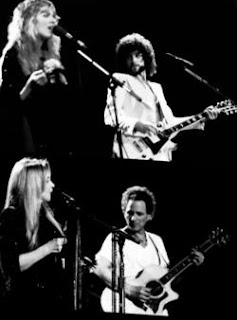 Less than 24 hours remain to listen to last weeks broadcast from BBC4 on "Follow-up Albums" featuring Fleetwood Mac's "Tusk".  Pete Paphides 3 part documentary on bands that made a splash with an album only to follow it up with a left turn.  Great piece on the band with new interviews from Lindsey and Stevie.


The above headline grabbing headline from The Quietus article opens a topic that has come up again and again regarding the idea of Lindsey Buckingham and Stevie Nicks reuniting as a duo (Buckingham Nicks).  It's a topic that's come up in the past, something the fan community would certainly welcome and what most people expect to happen if and when the Buckingham Nicks album ever sees the light of day on CD.  Their first and only album together from 1973 has never been released on CD.  Lindsey and Stevie both own the album have have the rights to do whatever they want with it.. and both have blamed each other for it not happening.  With the 40th anniversary (yes 40th, if you can believe that!) of the album approaching (2013). It would be the perfect opportunity to bring some attention to this really great album... Either re-release it as a stand alone, or record some new music together and release it as a double album, kind of a then and now... I think it would be cool!  Then do some live shows!

Anyway... the REALLY interesting part of this article is where Pete Paphide apparently confirms with The Quietus that portions of Stevie's interview regarding Lindsey working on new songs which he hoped the two of them could record together had been edited out of the interview footage by someone on Stevie's staff, who recorded the interview... Pete apparently also said that Lindsey was inspired to write the new music by the death of Stevie's mother whom he had known since both he and Stevie were teenagers.  Pete also said that Stevie was to meet up with Lindsey the day after their interview together.  What that meeting would have been about is unknown.  Could have been about the new music or the future of Fleetwood Mac.

"When we spoke to Paphides, he confirmed that when he interviewed Nicks for the programme (in a section that was never broadcast), she had mentioned that Buckingham had been working on some new songs, seemingly with a view to record them together. He had been inspired to do so after the death of Nicks' mother, whom he had known since he and Nicks got together as teenagers. Nicks was apparently due to meet Buckingham the day after Paphides' interview took place. The interview, Paphides explained, was recorded by one of Nicks' staff, and when it was sent back to him that section had been deleted."