Lindsey Buckingham - Live at The Belly Up
Salano Beach, CA - May 3, 2012
Written by Rick Ostop
KPRIFM 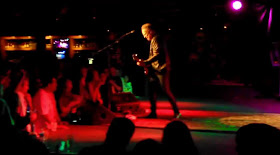 Towards the end of his show at the Belly Up Thursday night, May 3, Lindsey Buckingham explained how Fleetwood Mac is the “big machine” and what he is doing now is “just me - the little machine.” Though the “machine” might be smaller--just him and his multitude of guitars--the results were grandiose.

Buckingham, taking the stage for his hour and a half set by himself, seemed a slight bit tentative as he started working on a simple chord pattern. He wrestled with it over and over, before slipping into the first song of the night “That’s The Way Love Goes” (Note: It was actually Castaway Dreams) from his new album Seeds We Sow.  The new song was an interesting choppy choice for an opener and left the room kind of flat.  The familiarity, though, and the crowd response to the second number “Bleed To Love Her” was a whole different story. The fire and intensity Buckingham put into the performance seemed to awaken any apprehension he might have carried.  Buckingham drove the Fleetwood Mac song hard, soaring his vocals and intensely working his amazing finger picking guitar playing. To be able to carry off a full show by yourself, you have to display a confidence and talent level that can hold and captivate an audience. And when Buckingham finished “Bleed To Love Her,” he had everyone in the palm of his hand.

And here’s where the Belly Up truly shines. To be able to be no more than 10 feet away from a legendary musician, who you usually see playing an arena, is what this venue is all about. Being able to experience an artist with such stature and clout that close gave the audience a rare glimpse at Buckingham’s fascinating finger-picking guitar stylings.

After breaking a sweat on the first couple of numbers, Buckingham seemed relaxed with his solo performance, gaining momentum as he went along, even to the point of yelling out to the crowd after finishing an incredible version of “Big Love.” The song seemed not only to fire up Buckingham, but also the Belly up crowd. He continued his high energy assault, stalking the stage with his guitar pyrotechnics and even high-fiving the crowd after obliterating the Mac classic “Go Your Own Way."

Even though it was one of the shortest shows I have seen at the Belly Up, clocking in at 1 hour and 20 minutes, it was no doubt the best show I have seen there in the last few years.  After the first song, Buckingham was on complete fire building and building momentum throughout the night and leaving the crowd with a jaw-dropping performance. His absolutely electrifying guitar work was what I was looking forward to the most and Buckingham completely surpassed my intentions with his unique abilities and intense over-the-top guitar playing. And once it started  rolling, Buckingham’s “little machine” steam rolled the Solana Beach audience leaving an impression that is sure to last for years to come.