Guitarist and singer Bob Welch, whose work in the early 1970s for Fleetwood Mac set the stage for the band’s multiplatinum success later in the decade has died at the age of 66. 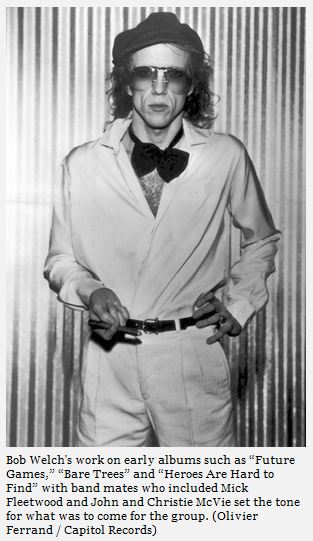 As a singer and guitarist for the group, Mr. Welch was lesser known than the pair who replaced him — Mr. Welch left the band in 1974, and his departure set the stage for Fleetwood Mac’s hit-making lineup when Stevie Nicks and Lindsey Buckingham were hired to take his place.

That would become the group’s most successful lineup, releasing the 1975 album “Fleetwood Mac” and “Rumours,” the band’s acclaimed 1977 hit album.

“My era was the bridge era,”
Mr. Welch told the Cleveland Plain Dealer in 1998, after he was excluded from the Fleetwood Mac lineup inducted into the Rock and Roll Hall of Fame. “It was a transition. But it was an important period in the history of the band. Mick Fleetwood dedicated a whole chapter of his biography to my era of the band and credited me with ‘saving Fleetwood Mac.’ Now they want to write me out of the history of the group.”

Mr. Welch went solo and scored a top 20 hit in 1977 with “Ebony Eyes.” The album from which it was culled, “French Kiss,” featured a number of former Fleetwood Mac members, as well as a rendition of “Sentimental Lady,” a song originally recorded with Fleetwood Mac but reworked by Mr. Welch.  Over the next six years Mr. Welch released five more studio albums, but none was as successful as his debut.

He continued to record music for the next two decades; his final album was “His Fleetwood Mac Years and Beyond, Vol. 2.”