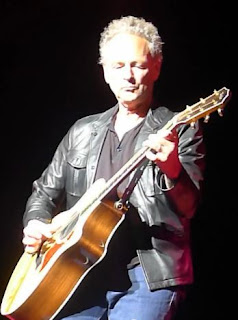 
With no new album to promote, Lindsey Buckingham doesn’t really need to tour. Heck, he doesn’t even need a band. His unique finger picking technique allows him to plays bass lines with his thumb while playing the melody with his fingers. The result is a one man wall of sound that overmatches the intimate venues he plays. This time around, he has no accompaniment, even the stagehands exchanging his guitars are out of view. He acknowledged the downsizing over his career, from the heyday of supergroup Fleetwood Mac to carrying only 3-4 members in his early solo career and culminating in this year’s one man show. “This tour I call the ‘Small Machine’” It allows for more creative freedom and risk taking. Obviously, Fleetwood Mac was a juggernaut and creative in a different way.” 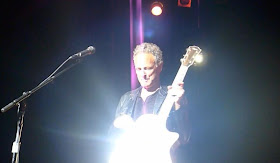 
I can't remember how long it has been since I last went to a seated show, but it is always nice to be able to sit and be able to focus entirely on what is happening onstage. This time around I was seeing Lindsey Buckingham, who most people are familiar with from his work with Fleetwood Mac. But Buckingham has also established himself as a talented solo artist capable of creating interesting material without the assistance of a full band. His progression has taken numerous steps, first touring with a large crew of backing musicians and on this most recent set of dates opting to perform without any support. His set at the Howard Theatre in Washington D.C. lasted for about an hour and fifteen minutes after a two song encore, and while this may have been one of the first times he was letting his guitar and vocal work stand on its own Buckingham showcased that he was well prepared.