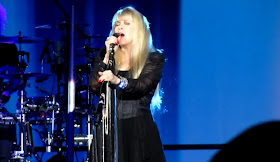 
The twirls may be a little slower these days, but the spirit remains strong.

Tuesday night at the Bank of America Pavilion, Stevie Nicks enchanted with a two-hour set that was part “Storytellers,” part patriotic tribute, part crystal visions, and all heart.

The show was heavy on tracks from her latest album, 2011’s splendid “In Your Dreams,” which may have been unfamiliar to some in the packed house, but Nicks was a savvy sorceress of sequencing.

The Fleetwood Mac chanteuse wisely prefaced new tunes with stories about their origins to provide a way in and alternated fresh tracks with big hits, engendering good will.

That meant that Fleetwood Mac’s “Dreams” — still retaining its warm, woozy charm — flowed nicely into “Moonlight (A Vampire’s Dream)” — which Nicks explained began life in the early ’70s and was resurrected when she was inspired by the second “Twilight” film — which then segued easily into a churning, spectral, wailing “Gold Dust Woman.”

Continue to the full review at the original site


UNCASVILLE _ Marking the second summer in a row that she has been touring to promote her latest release “In Your Dreams,” Stevie Nicks performed for more than two hours at the sold out Mohegan Sun Arena on Thursday night.

Despite a rock legacy that stretches back to the 70s, it was new music that Nicks wanted to focus on during her 16 song set.

Even with the courteous attention given to the new material, Nicks played six tracks from the record, it was the hits of yesteryear mixed in between that had the audience rushing the stage.

With veteran guitarist Waddy Wachtel leading the band, Nicks hit the stage with a cover, blasting out Led Zeppelin’s “Rock’ N’ Roll,” setting the tone for the evening. She followed up with “Enchanted,” from her seminal solo release “The Wild Heart.”

Then began a sequence of new and then old as if the different eras of her career were in competition. It was “Secret Love” (new) followed by “Dreams” the song Nick’s said served as Fleetwood Mac’s only Number One hit on the Top 40 charts.

Continue to the full review at the original site 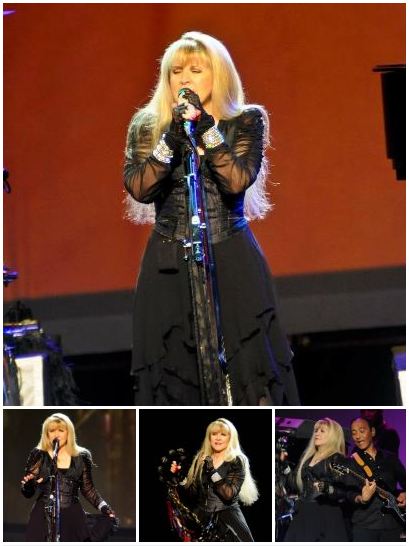 Stevie Nicks' second to last solo show this month at Farm Bureau Live  in Virginia Beach Saturday Night was cut short by what looks like an 11pm curfew... It was a hot muggy night in Virginia Beach... Stevie looked great (check out the photos), but the set had to be tighted up to meet an 11pm curfew.  Gone were Ghosts Are Gone + The encore Love Is.  The show ended at 10:45pm with Landslide which was moved to the encore slot.  Also missing on this night were the band intros.