GoUpstate.com's entertainment site, 85-26.com, is giving away three pairs of tickets to "An Intimate Evening With Lindsey Buckingham" at 8 p.m. July 29 at the Spartanburg Memorial Auditorium, 385 N. Church St.

Three winners will be drawn at random and will win two tickets each to the concert.


Entries must be received by noon Friday, July 20. Simply fill out the form HERE. One entry per person, please.

Winners will be contacted via e-mail July 20 and should plan to pick up their tickets at the Herald-Journal office in downtown Spartanburg no later than Wednesday, July 25, between 9 a.m. and 5 p.m. 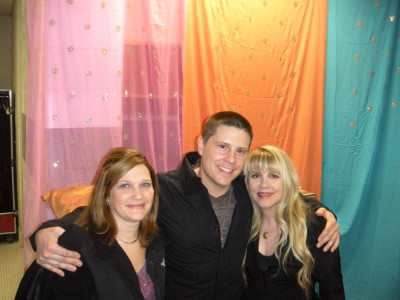 The Sun Chronicle
BY LAUREN CARTER

In the midst of his struggles after suffering a severe leg injury in Iraq, Heath Hobson experienced some upbeat moments, as well - and chief among them was the chance to connect with rock goddess Stevie Nicks.

Nicks, a solo star and member of the legendary band Fleetwood Mac, has been quietly making trips to Walter Reed Army Medical Center to visit wounded soldiers for several years, traveling under the radar, without an entourage or a team of photographers in her wake.

In 2007, while Hobson was recovering at Walter Reed with his wife Jodi at his side, Nicks surprised them both with a lengthy visit, a brand new iPod with more than 1,000 songs pre-loaded and a copy of her poem "Soldier's Angel," which would later become a song on her 2011 album, "In Your Dreams."

"The first time I met her was so personal," Hobson said. "It was awesome. She was just like a regular person in the hospital. It was great. We didn't even know she was there until about 10 minutes before, so there wasn't enough time to get worked up about it."

And they would meet again.

In 2011, the couple attended Nicks' joint concert with Rod Stewart at the TD Garden, and linked up with Nicks in her dressing room backstage, where she played the album version of "Soldier's Angel" for them before it was released and personally sang to the pair.

"It was crazy," Hobson said. "(Stevie) was super touched by it. It's for real, it's a legit feeling she has for seeing the wounded soldiers. That part of it was like, 'Wow, I'm so fortunate to have that moment.'"

Hobson said he plans to contact Nicks again in time, joking that he doesn't want to "overdo it." He said that meeting the down-to-earth star has been one of the most memorable parts of his journey.

"She's so humble about it," he said. "No one knows about that side of her unless they meet her." 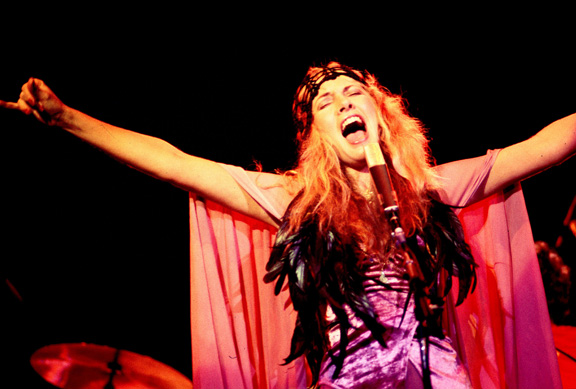 All of a sudden, mid day yesterday (July 12th), a corner of the Internet exploded. News broke that legendary British-American rock band Fleetwood Mac are planning a reunion in 2013, something diehard fans of the Mac had assumed was impossible due to the famed infighting between the band's members. Lead singer/tambourine playing sorceress Stevie Nicks announced the reformation on CBS This Morning, and of course, both super-fans and casual admirers alike went nuts. Nicks, who wrote the band's 1977 Billboard #1 hit "Dreams," is as much a style icon as a musical muse, with everyone from Best Coast's Bethany Cosentino, America's sweetheart Taylor Swift, and Florence + The Machine singer Florence Welch counting themselves as acolytes. Even if you don't know you're familiar with Stevie Nicks, you probably are. You know the opening of Destiny's Child's "Bootylicious," well, it's sampled from Nicks's "Edge of Seventeen," off of her 1981 solo record, Bella Donna. T.Swift calls Nicks a "childhood idol," and Bethany Cosentino has Making Rumors: The Inside Story of the Classic Fleetwood Mac Album on her coffee table. There is also a Fleetwood Mac tribute record being released on August 14th, titled Just Tell Me That You Want Me, which includes takes on the band's tunes by Best Coast, Lykke Li, The Kills and MGMT.

Continue to the full article on the original site