After four decades, STEVIE NICKS proves she's still got it

"Nicks' mystical image, which brought her superstardom in the '70s as the female focal point of Fleetwood Mac, seems to have a life of its own." 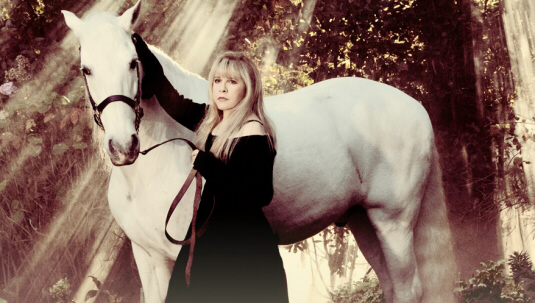 In many ways, Stevie Nicks has embodied the famed ethos of James Brown's "Hot Pants" song: "A woman got to use just what she got to get just what she wants."

But unlike the bold soul sister in that funk classic, who declared her worth in skimpy clothes, Nicks draped herself in Victorian lace and wore flowing dresses with sleeves that spread like wings. Trailed by yards of gauzy fabric and her mouth in a perpetual pout, Nicks became one of rock's sexiest women.

Her torrid affairs with fellow pop stars, which inspired some of her greatest hits, and an epic drug habit are just as much a part of her legend as her famously scratchy voice and poetic music. Nicks' liberated persona has inspired a generation of female rockers.

But she's not much of a chameleon, like other celebrated women in pop: Joni Mitchell and Madonna immediately come to mind. Nicks has maintained her iconic status without removing a layer of her witchy costumes or tinkering much with her beguiling pop-rock hybrid.

Great article.... Get the rest on the original site
Nickslive at Thursday, July 12, 2012
Share