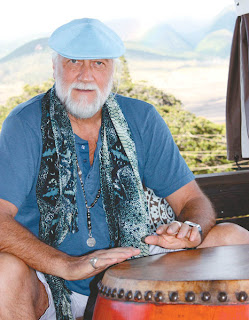 Mick picks up beat for Fleetwood’s opening
In an intimate interview last week on the rooftop of his soon-to-open restaurant and nightclub, Mick Fleetwood shares how the idea for it goes back to his youth.

As the grand ring master of Fleetwood Mac, the venerable drummer has finally secured the agreement of all band members to launch a new tour in 2013, after Stevie Nicks has concluded promoting her current solo album, "In Your Dreams."

"Everyone's on board," Mick announces. "We're all on the same page. Stevie's been like Lindsey who went off and did his thing and was at one point ready to do some touring, but couldn't figure it out. And it went on and on.

"After 40-odd years of whatever our thing is, you have to learn to get over being disappointed when you think something is happening and then it's not. But none of this could have worked out. So we're planning to start touring in March. There's a commitment to one leg and if it's a happy leg then we will continue. It would be foolish not to.

"It's really about demand. You never quite know if you leave the scene. Bands get the shock of their lives when they haven't toured for years and they have half full places they're hurting. The good thing about us is we have a very strong audience and we don't over put ourselves out there. So when we do go out people are enthused and we usually do very well."

Although they will embark on a major trek without promoting a new album, some of the members have recently collaborated on new Mac music.

"Lindsey, myself and John (McVie) are hoping Stevie will enjoy at least doing an EP," he says. "Lindsey and I have put some great music together. I went to LA for six weeks and we cut eight tracks as a calling card that we really want to do something. I think some of that should see the light of day. It's really good and fresh and young. And if everyone's happy, maybe that will be the beginnings of an album.