Stevie Nicks at the Pavilion
by Jed Gottlieb
Boston Herald


Every rock list is front-loaded with dudes. The Beatles are always named the best band. Bob Dylan is the best songwriter. Jimi Hendrix is the best guitarist. All this male dominance, makes Stevie Nicks’ glory even greater.

And after her stunning show last night at the Bank of American Pavilion, it’s time to give Nicks her due and bump her up a few notches on these lists.

Nicks proved again that she’s rock’s Golden Goddess: Top five when it comes to tambourine work, tied for first with Steven Tyler in the scarves, sashes, frills and feathers category, and No. 1 in on stage twirling. 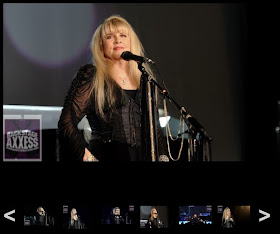 
Every girl who grew up in the 80’s wanted to emulate Stevie Nicks; I was no exception. Her flaxen hair, whimsical wardrobe, and her mystical persona spoke to the wild hearts of teenage girls everywhere. The enchanting songstress was greeted by many of those now 40 and 50 something fans when she performed before a sold-out audience inside the Seneca Niagara Casino this past Saturday night.

Continue to the full review with photos


Niagara Falls, NY -  Stevie Nicks looks like she either made a deal with the devil, or has been drinking from the fountain of youth since the 80's, as when she appeared at the Seneca Niagara Events Center this past Saturday night, she looked and sounded like she really hasn't aged at all.  With her references of being a vampire, to claiming to have lived a past life in the 18th century, perhaps my assumptions about Nicks aren't all that off.

Continue to the full review & photos