Lindsey Buckingham - A man, his music and an arsenal of guitars await this weekend 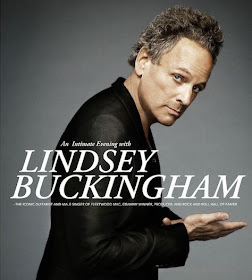 
He was ranked as one of Rolling Stone’s 100 Greatest Guitarists, has been inducted into the Rock ‘n Roll Hall of Fame and on Sunday night, the former Fleetwood Mac member will bring his signature finger-pickin’ guitar style to the Lutcher. If we’re lucky, he’ll tell some juicy between-song anecdotes from his days of tumultuously dating Stevie Nicks.


ORANGE — A man, his music and an arsenal of guitars await this weekend.

American singer-songwriter, musician and member of the Rock and Roll Hall of Fame Lindsey Buckingham will perform in concert at 8 p.m., Sunday, Aug. 19, at the Lutcher Theater. Tickets are $35-$65 and available at the box office, by phone at 409-886-5535 or online at www.lutcher.org.

Buckingham, who will perform a special, one-man show Sunday night, is best known for his time as a member of Fleetwood Mac from 1975-19875 and again from 1997 to the present. Also, during this time, he has managed to release six solo albums and two live albums. This Sunday’s showcase will feature Buckingham performing solo with only his voice and an array of guitars to give the music life.

Throughout his 40 year music career as a member of British-American rock band Fleetwood Mac and a solo artist, Buckingham has been a part of some of the most notable songs in music history. He will be performing many of those and others at Sunday’s concert.