The Lutcher Theater’s 2012-13 Season opens Sunday, Aug. 19, at 8 p.m. with An Intimate Evening with Lindsey Buckingham.
by Brenda Cannon Henley
The Examiner 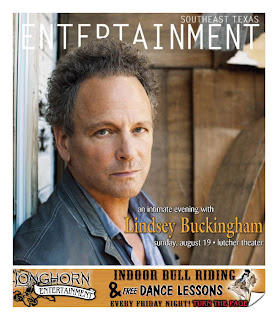 You might recognize this legendary performer from his years as the lead guitarist and soloist of Fleetwood Mac, a member of the Rock ‘n’ Roll Hall of Fame, winner of countless awards, and as helping to define the sound of rock for the last three decades. He is the predominant musical force behind such popular Fleetwood Mac albums as “Rumours” and “Tusk.” His solo work has created such hits as “Trouble,” “Go Insane” and “Holiday Road.” Buckingham was with Fleetwood Mac from 1975 until 1987 and from 1997 to the present. Aside from his work with the group, Buckingham has released six solo albums and two live albums, and is known for his finger picking guitar style and wide vocal range.