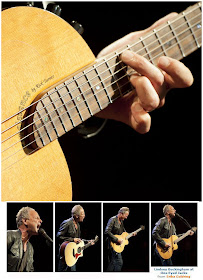 
The stage at One Eyed Jacks Saturday night, in anticipation of Lindsey Buckingham, looked surprisingly bare. There was no forbidding security team, no extra sound personnel, no barriers at the stage’s edge, not even a chair by the microphone – just a spotlight and a couple of bottles of water. A rack of half a dozen very nice guitars in the wings stage right was the only hint that the night’s featured entertainment was a bona fide rock legend, veteran of inaugural balls, multi-platinum albums and one of the most complicated and dramatic band soap operas in musical history.

Continue To The Full Review