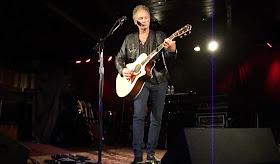 It was supposed to be a week in music storyboarded around rock’s most sordid romance saga: solo tours by Stevie Nicks and Lindsey Buckingham were to cross wakes only 48 hours apart in an unlikely place. As Buckingham’s small machine rolled along with uncompromised efficiency, it was Nicks’ big machine that faltered — co-headliner Rod Stewart fell ill and their Greensboro show was canceled, a decision perhaps aided by slow ticket sales. That wasn’t an issue for Buckingham, who’s packed show on Friday at Bucked Up Super Saloon in Kernersville provided for all the intimacy of a coffee house open mic night.

The nature of those machines was one of Buckingham’s favorite topics of conversation on Friday. He noted how shows like this one — in a small town at a country bar unaccustomed to hosting performers of his caliber — were only made possible by the big machine that is Fleetwood Mac. Rather than an an oversized, idling tour bus, it was Buckingham’s silver Mercedes L Class that sat immediately outside the door from where he took the stage to the unconventional, yet stunning venue for his purposes. The club’s dancefloor was transformed into a makeshift theater with foldout chairs, but the ambiance created by the sparse lighting and hardwood construction possessed all the warmth of a more traditional venue.