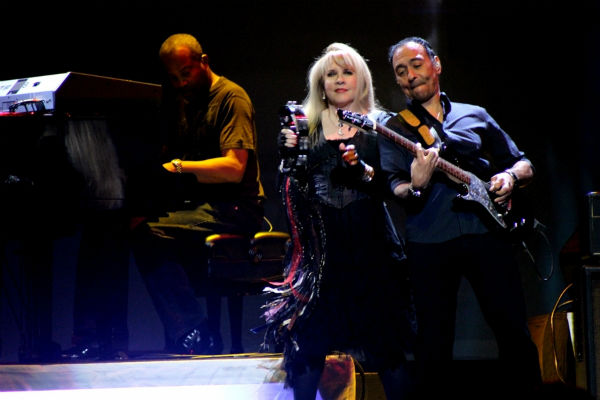 
Co-headliner Stevie Nicks opened the show with Led Zeppelin's "Rock and Roll" as pictures of rock icons of yore -- that she probably partied "serious" with -- flashed on a giant screen behind her and her band. It was cool to see guitarist Waddy Wachtel in action next to Nicks after years of reading his name in biographies and liner notes, too.

Nicks' set was heavy on the solo big guns ("Stand Back", "Edge oOf Seventeen"), her newish In your Dreams material, and the mammoths from her Fleetwood Mac catalog. She also has a cool little tent onstage that she changes into different goth gear every few songs too.

Houston's August music calendar is getting another dose of Mac with Lindsey Buckingham playing Fitzgerald's in a few days, and the band itself should be here in 2013.

The witchy woman told a great story about visiting injured troops at Walter Reed Army Medical Center, before introducing "Soldier's Angel." During the middle of her story -- a moving one -- someone on the floor of the arena bellowed "Boring!" which was pretty classy.

Thursday night was Nicks and Stewart's last show on this tour together, but she promised more touring in the future. The duo makes for strange concert bedfellows, and they didn't end up taking the stage together as they had on some previous dates.

She closed her portion of the show with a perfect version of "Landslide" with Wachtel. Give us them Mac dates already. Also, her "Landslide" means more at 64 years of age than it ever did when it was written, and she said as much onstage too.

Continue to Houston Press for the Full Review

"Serving as opening act, Nicks came out smokin’ – her crack band, led by guitar whiz Waddy Wachtel, ripped out a rousing cover of Led Zeppelin’s “Rock and Roll,” and we were off to the races."
Full Review