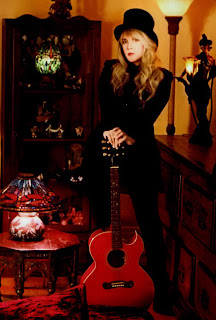 Stevie Nicks revealed that even after all these years in the business, there are still three people she's been dying to work with. Nicks, who last night (August 9th) wrapped her joint dates with Rod Stewart in Houston, just announced two new Florida stops for September, hitting Saint Petersburg on September 24th and Saint Augustine on September 25th.

Nicks told us that she's waited 40 years to share a stage with three distinct singers: "Well, when I moved to Los Angeles with Lindsey (Buckingham) in 1972, I wanted -- there were three songs I wanted to sing two-part harmony with; Paul McCartney 'Yesterday,' James Taylor 'Fire And Rain,' and Elton John 'Your Song.' I've never gotten to sing any of those three songs with those three men! So, I'm still looking that maybe that will happen someday. Because that was before this happened, y'know? That was like way before we were famous."