Full Hour Conversation with Stevie Nicks
Hampton International Film Festival
A couple of things Stevie touched on during the Q&A session in Sag Harbor was that she just did a thing for iHeart Radio and mentioned that they listened to the playback to see if they wanted to tweak it prior to it being aired.  I'm not a subscriber to iHeart Radio, so if anyone is, keep your ears peeled for when this is supposed to air, or maybe it already has.  Also, she mentioned that she has two more gigs coming up something on Halloween and the Elton John benefit.  We know about the Elton John benefit in NYC on Oct 15th, and we know about the Beverly Wilshire Hotel, Women’s Guild Cedars-Sinai Gala she's performing at on November 13th, but the Halloween thing.  It's apparently in San Francisco Oct 31st.  It's likely another corporate or private gig.

RECAP:
An Afternoon With Stevie Nicks + In Your Dreams Screening
Sag Harbor, NY - October 7 , 2012
By: Val


For those that weren't able to attend yesterday, I thought I’d write down highlights I remember. For Stevie fans, it was truly a dream come true to see her in this setting.

She was charming, captivating, classy, candid, honest and the best part, hilarious! What a great sense of humor she has. She spoke of things we have read in previous interviews, how the writing process started with Dave, how she’d never written with anyone else before. Even if she had collaborated, it was done thru Campbell sending her tracks and her putting the lyrics to it, never in the same room with the co-writer. She talked about how easy it was to work with Dave as it was never argumentative, as it could be with Lindsey. She described the whole creation of the album as being so magical, which we were later to see in the documentary, magical indeed....oh to be a fly on the wall in that house!! 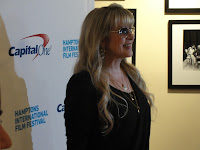 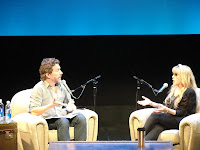 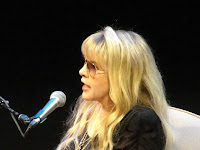 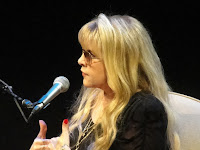 She told a story of Lindsey trying to tell her it was in bad form to change from first to second person tense in the middle of writing a song, and it was more like a lecture than a suggestion and how that is why she could never write with him as she does not like being told what to do! It was very funny, and the audience was hanging on her every word. You would never tell that to Bob Dylan, she told him. She also spoke on how it was Lindsey’s working on Soldier’s Angel that really brought them to a good place, prior to that, is was still a war going on. 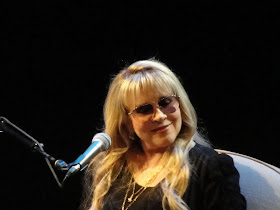 As someone said, she spoke about after they lost the Grammy for The Dance, she said that Lindsey was upset about that, and it was right after that that Christine said she “was done” and Stevie said by the look on her face it was that look that you get when someone breaks up with you, when you know there are no if ands or buts, it is done. She also stated that Christine over time had been in a band since she was 14 I think and over time, she had become really afraid of flying, extreme panic attacks, and could not do it any longer because of that. She said that they were done touring the US for The Dance and could have easily toured Europe, Australia etc., but it would have required a lot of flights and that Christine just could not do it any longer.

An audience member asked her if she’d write a memoir, and she stated that she was not interested in writing about the dark stuff, if you want to read that, there are plenty of articles from the 70’s that cover that. She said she’d would like to cover the highlights in a book, vignettes of things that were highlights of her life, the first time she saw a private jet just for Fleetwood Mac, the first time she put on one of her beautiful dresses, men that had touched her life, some of her drawings and poetry, things like that. She thought it was un-classy that in Heart’s newly released bio, they have a story in there of doing coke with Stevie that she said was a private moment and as much as she loves them as artists, she was not pleased that they chose to write about it.

For those of us worried she might slow down, rest assured, she spoke of starting with Fleetwood Mac in March 2013, writing more songs, and will continue her solo career as well. An audience member asked if she’d ever do a stripped down tour, just guitar and piano and she spoke about having so many songs that are never done live, and how it would be nice to go out and do a few minutes of songs that blend together and she sang a medley of Bella Donna, Wild Heart and Rock a Little, the crowd melted with that. After the film Q&A she brought it up again, saying it would be nice to do in a small setting with old video clips playing in a surround setting on the walls, and then joked about having no computer skills and having all these high tech ideas.

The film was absolutely exquisite. They showed clips and photos of Fleetwood Mac in the 70’s, pix of her and her family as a toddler, teen, etc. In the beginning there is a montage of clips from fans at concerts, talking about why we love her so. Then we see Dave knocking on her door and coming in to start the record. They broke down I think, every song on the record, showed how it was created, from start to finish and then music video type beautiful clips for each. They show actual video that she shot with friends from the balcony in Italy for Italian Summer, a fireworks display in the evening and then a storm coming in over the sea that was absolutely incredible. There were a lot of tough moments to watch where you could hear audience members crying, New Orleans showed a lot of the brutal footage of Katrina with people dead in the street, starving and suffering, and then she explained how that drove her to the piano to write that song. Same for Soldiers Angel, actual footage of a soldier she had visited in a coma in a very critical state, and then she told afterwards how he survived and attended her show in Boston this past summer, very very touching. Each song had approx. a 10 minute piece devoted to it, and the audience would applaud after each segment.

The fan clips were great, one of the women, Miriam was in the audience, and Stevie gave her the Wayne’s World, we’re not worthy bow from the stage in the Q & A, a moment, I am sure she will remember forever. A soldier’s clip on how her album saved him and helped him cope while serving, listening to it every day, very touching. There were so many great moments, it would take me all day to write it all. The best was really seeing Stevie reveling in her status of Rock and Roll Queen and legend, the stories told, the work accomplished and the life that she has lead on her own terms, her own rules, incredibly smart, strong, creative, and so so funny. We were all in awe, I’ll never forget it. There is magic.....all around you...... every time you walk in the room.

Thank you Val for your write-up/photos and for sending it in!

After the screening Dave and Stevie spoke to the audience
in the theatre and took questions.
Watch Video #2
AND, if you missed the Audience Q&A Prior to the film screening, you can check it out here
and watch Stevie speak about Christine McVie and Lindsey Buckingham here
Nickslive at Monday, October 08, 2012
Share