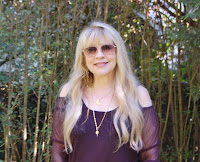 Day 1: The Hamptons International Film Festival is under way!

Photographer Lisa Tamburini was there... She captured a couple shots here of Stevie Nicks during Day 1 of the festival where many filmmakers and stars were on hand doing press.

Thanks to Lisa Tamburini and Dawn Watson for Tweeting out some shots of Stevie.. She looks great!  Exciting weekend for all I"m sure!

Below Photos: The first one is of Lisa Tamburini (The photographer). The second photo below is of Journalist Dawn Watson, who interviewed Stevie just the other day.  If you missed it, check out her interview at  27 East. Dawn Watson on Twitter 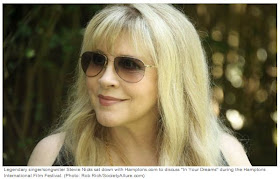 INTERVIEW: Stevie Nicks On Making "In Your Dreams" And The Hamptons
By Nicole B. Brewer and Nicole Barylski
Hamptons.com

After a ten year hiatus legendary songwriter Stevie Nicks is back with her latest album "In Your Dreams" and a rockumentary, produced by the Eurythmics' Dave Stewart, of the same name. "When you see it you are going to be living in my world for one hour and forty minutes," said Nicks during our recent interview. The 'gypsy' is in the Hamptons this weekend for the 20th Hamptons International Film Festival. We sat down with her at The Maidstone on a gorgeous fall afternoon to get the scoop.

"It was the best year of my life! I have never had so much fun in my life," exclaimed Nicks as we sat in the garden and talked about nail polish a bit before our interview officially began. She prefers OPI Big Apple Red and does her nails herself saying as we settled in, "If I wasn't doing this I'd be a manicurist!"

The "In Your Dreams" album was ten years in the making and all started with 9/11 explained Nicks, "I went on the road at the end of June with 'Trouble in Shangri-La'. I had been on the road for two and a half months, which is nothing and then 9/11 happened. So for all practical purposes the record and everything blew up." Nicks was in New York by herself set to enjoy her one day off on that fateful day, her band was in Canada getting ready for the next leg of the tour. "I went to bed at 7:30 p.m.," she went on to say, "and when [my assistant] Karen woke me up at 11 a.m. the world had changed."

Ever generous to her devoted fans, Nicks stayed on the road for another month because "no one had turned their tickets in or asked for refunds." She went on the "Say You Will" tour with Fleetwood Mac in 2002, then again on her own in 2003 and 2004. During that time she kept pondering writing and another record but the music industry was in flux and piracy was a hot topic. Her advisors told her to enjoy touring and wait. Nicks says her managers told her, "You're a songwriter, you create the song it's yours, you write the poem, and you put it out. [Then] one person buys it and sends it out to 500 personal friends and they send it out to their friends. You are a songwriter this is how you make money. What we recommend is you go back on the road because you can still do big shows and sell tickets. A lot of people can't." So she did.

Inspiration for "In Your Dreams" happened quite unexpectedly in 2009 while on tour with Fleetwood Mac in Australia. "I saw the second 'Twilight' movie and wrote 'Moonlight (A Vampire's Dream)' right then." Nicks told us, "There was a piano in my suite and I said to my assistant Karen, I am ready to make a record now. I don't care what is going on around me I'm doing it. If nobody wants it or everybody steals it I will have to deal with that then."

As soon as she got off tour she called Dave Stewart and asked him if he wanted to work with her to produce. He jumped right in. "Dave came up [to my house] to spend one day discussing it and I said why don't we do it here. We don't have to go into the studio and pay $2,500 per day. He said, 'let's do it.'" Vamping a bit and mimicking her dear friend and collaborator she went on, "By the third day he said, 'Darling we have to film this.' And I said, 'Darling do you know what that means?' Now this guy dresses up every day and loves it." Nicks is not in full stage dress and makeup at home, she likes a more casual look. For her the thought of cameras every day meant hair, makeup, and wardrobe which caused some hesitation. She relented when he reassured her, "He said if you don't love it, we won't use it. I said, 'Hand to God?' and he promised 'Swear to God.'" But he didn't get off that easy. "Fair enough," she told him, "But I will hunt you down and kill you if any of it gets out and I don't like it."

From there they filmed for a year and in her words, "Had the best time." Stewart's team then edited a year of her life down to three hours. Later the film would be cut to a final hour and forty minutes. "We finished just two weeks ago," said Nicks, "With that kind of thing it's like 'no you can't have it it's not done yet.'" When they finally handed it in and realized the film was complete Nicks was "in tears and I said 'take it.' It's like your child."

Regarding the genius that is Dave Stewart, Nicks went on to gush a bit, "He is an amazing photographer. He's been filming women for years. With Annie Lennox, he is the reason she cut off all her hair. He was behind all of this amazing stuff, I didn't even know." On "In Your Dreams," Nicks says he gave everyone Flip cameras and said, "Everyone film and we will see what we come up with. If it doesn't make sense or is an 'Alice In Wonderland' bewitched world we won't put it up. If we love it we will let people have it." It was an "easy thing to do because Dave made it into a no big deal thing."

Having only been in and out of the Hamptons a mere three times for benefits over the years Nicks is looking forward to enjoying the film festival weekend in Sag Harbor with friends. So if you notice a familiar looking blonde with a crescent moon necklace window shopping next to you on Main Street take time for a second look, it might just be the Stevie Nicks, star of "In Your Dreams" and 140 million album selling Rock and Roll Hall of Fame legend.

• Get up close and personal with Stevie Nicks at Bay Street Theatre on Sunday, October 7, 2012, at noon for a "Conversation With Stevie Nicks" presented by Capital One. Catch a screening of "In Your Dreams" during the Hamptons International Film Festival this weekend at the Sag Harbor Cinema also on Sunday, October 7, 2012, at 3:00 p.m. For details check out www.hamptonsfilmfest.org

The Hamptons received a visit from California rock royalty Thursday night when Stevie Nicks drove into town. On Friday afternoon, Nicks, the face of Fleetwood Mac and a solo artist in her own right, began granting interviews to discuss her first film "In Your Dreams: Stevie Nicks."

The documentary chronicles the making of her 2011 album, "In Your Dreams," which was produced by Dave Stewart (of Eurythmics) and Glenn Ballard. It became the singer’s fifth album to enter Billboard’s Top Ten.

Stewart and Nicks co-directed the film, which will have its world premiere 3 p.m. Sunday at the Regal Southampton. Nicks will also be interviewed before a live audience earlier that day at 1 p.m. at the Bay Street Theater in Sag Harbor.

Nicks, 64, sat poolside at the Maidstone hotel to talk about her first film and her first-time jitters. Here's an edited version of the conversation.

How did you choose the Hamptons festival for your world premiere?
I can't tell you that, because I honestly don't know. I've never been to a film festival. I've heard of Sundance and Cannes, but I've never gone to them, so I really have no idea.

So who made the decision?
Probably Liz [Rosenberg, powerhouse publicist, relaxing in a deck-chair nearby]. Dave and his people spent all last year editing the film, probably 10 to 11 months, down to 3 hours. And then on Feb. 1, me and Dave's editor and my assistant Karen [Johnston], we started editing at my house. So we edited for four months to take it from 3 hours down to an hour-40. I've been on tour, editing, on tour, editing. So really this has all come very fast. I was just told by the powers that be that the Hamptons film festival was fantastic, and that I was lucky enough to have been asked. I'm thrilled to be here, because I've never really gotten to spend any time here. I'm not leaving till Monday.

Are you coming to see the film?
I'll be the one cowering in the dark, with my hands over my eyes. I'll be all the way in the back row.


Read the full interview at Newsday